Amid a political and economic crisis heightened by the assassination of Haiti’s beleaguered president on Wednesday, young people have also been suffering the long-term impact of disrupted education and protection services amidst the COVID-19 pandemic, as well as the threat of hurricanes.

UNICEF said it was deeply concerned that further violence and insecurity following the assassination could pose serious challenges to the humanitarian work of its teams on the ground, and their ability to safely reach the most vulnerable children and families.

While UNICEF has lifesaving supplies in Haiti, prolonged violence and instability could prevent the delivery and replenishment of stockpiles, including vaccines, medicine and medical supplies.

“This is the worst humanitarian crisis the country has faced over the past few years, and it’s deteriorating week after week,” said Bruno Maes, UNICEF representative in Haiti.

“Many children’s lives depend on humanitarian aid and essential items, such as vaccines, syringes, medicines and therapeutic foods. When gangs are fighting in the street and bullets are flying, it’s hard to reach the most vulnerable families with these lifesaving supplies.

“Unless humanitarian organizations are granted safe passage, thousands of affected children will continue to be left with little to no assistance”, he added.

In the first three months of 2021 alone, UNICEF said the number of admissions of severely acute malnourished children in health facilities across Haiti, increased by 26 per cent compared to last year.
Since early June, new clashes between rival armed gangs have erupted in some urban areas of the capital Port-au-Prince, which led to hundreds of houses being burned down or damaged.

Over 15,000 women and children were forced to flee their homes due to acts of violence in and around the capital, Port-au-Prince, 80 per cent of them in just the past four weeks.

This recent spike of violence comes amidst a gradual rise of COVID-19 cases in Haiti, said UNICEF. The main COVID-19 dedicated hospitals are saturated and face a shortage of oxygen, while some patients are dying because armed gang violence prevents ambulances from reaching them with oxygen and emergency treatment.

“Haiti is the only country in the Western Hemisphere where not a single dose of the COVID-19 vaccine has been received. It’s unacceptable”, said Mr. Maes.

“Gang violence in and around Port-au-Prince is likely to further delay the arrival of COVID-19 vaccines and make their distribution across the country more complicated. Amidst the upsurge of coronavirus cases in Haiti, any additional day without vaccine puts hundreds of lives under threat.”

At least 1.5 million children in Haiti are in urgent need of emergency relief.

UNICEF is pledging support for the distribution, transportation and storage of COVID-19 vaccines at the right temperature. In the past three years, the agency has installed more than 920 solar refrigerators in Haiti to strengthen the cold chain mainly in remote areas where electricity is unreliable. In total, UNICEF has equipped 96 per cent of all Haiti’s health institutions with solar fridges.

The agency is seeking $48.9 million this year to meet the humanitarian needs of 1.5 million people in Haiti including over 700,000 children, which have been exacerbated by the pandemic and gang violence. So far, this humanitarian appeal has secured only 31 per cent of the funding it needs. 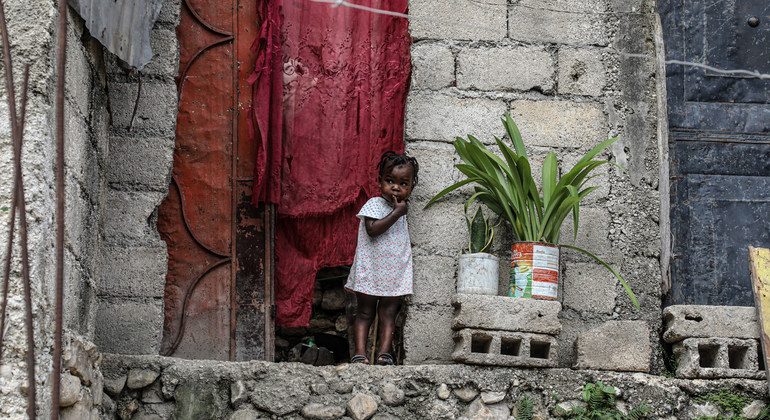