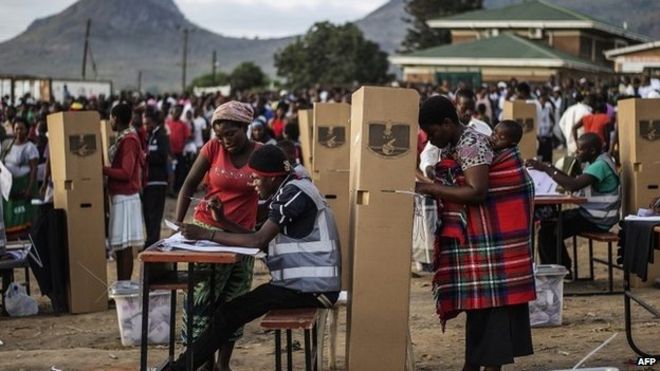 An hour before the end of the official campaign period on Sunday, May 19, 2019, Chilima held a press conference early in the morning where he updated the nation on events happening before the elections.

The Vice President  revealed ruling Democratic Progressive Party (DPP) plans to use it’s cadets as fake police officers in its plan to rig the elections.

Chilima said UTM has discovered that some people, who are not police officers, have been deployed to polling centres.

As quoted by the Daily Times, he said, “there is a gentleman called Augustine Chihuri who is a former commissioner general of Zimbabwe police.

He is a fugitive on the run and he is responsible for deploying police uniform to DPP Cadets.

“We demand that he leaves this country immediately”. He also said he was aware of plans of “seeding pre-marked ballot papers using some police impersonators”.

Chilima added that he has information that the government machinery wants to shut down communication systems tomorrow.

“We would like to commend the legal minds that sat in that meeting for advising against such a decision,” he said.

So far, information being gathered by different teams in UTM show that DPP is under panic because most of their rigging plans have been exposed and dealt with by UTM, Malawi electoral Commission (MEC) officials and the Malawi Defence Force.

Within a day after Chilima’s demonstration of excellent leadership, there has been a series of victories as follows:

As the situation is still very fluid, more victories will surely come.

Meanwhile there is a video circulating on social media of members of the Malawi Defence Force singing and dancing as they tell voters to go out and vote.

The Malawi Defence has always been a great defender of Malawi’s democracy.

Chilima has shown rare leadership just when the country needs it’s citizens to choose leaders that they want without anybody’s interference and cheating.

He has been vigilant and unrelenting in his bid to fulfill his promise to Malawians that nobody is going rig these elections.

Chilima and UTM are doing everything possible to ensure free and fair elections while Lazarus Chakwera and Malawi Congress Party (MCP) are sleeping.

Instead of supporting the noble effort that UTM is advancing, the old party is busy insulting UTM Party leadership.

When will MCP wake up from it’s slumber?