You are here: Home » Opinion » Citizen Solomon Akuma: A Cry For Justice! By Ozodinukwe Okenwa

Citizen Solomon Akuma: A Cry For Justice! By Ozodinukwe Okenwa

On April 2, 2020, in Aba, Abia State, a young pharmacist, Solomon Akuma, 29, was arrested for allegedly making an inflammatory social media post against the President, Muhammadu Buhari and his late Chief of Staff, Abba Kyari. Akuma was said to have threatened to hire an assassin to kill Buhari and his former late CoS, Kyari! After spending more than three months in illegal detention without trial he was eventually arraigned at a Federal High Court in Abuja for charges bordering on terrorism, sedition, criminal intimidation of the President and threat to his life. 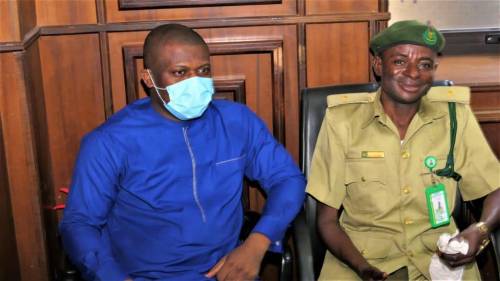 But did Akuma actually said seriously that he would hire a sniper to snuff life out of the President? Well, something must have led to the threat if there was a threat at all. Even if citizen Akuma had threatened to hire a professional killer from Russia or whereever to kill the President was it a joke taken too far or just an isolated issue of juvenile delinquency?

At 29 Akuma is relatively a young Nigerian but that does not mean that as an adult he is permitted to openly threaten an incumbent President with assassination. On a lighter note is the President and Commander-in-Chief afraid of death or what?

Having said that, however, it stands to reason to state here that in the event of such threats the laws are there to take their natural course. But it is sad to note that justice is not being done to the Akuma case for reasons of executive interference or cruelty towards his temerity. Or do we conclude that since he is an Igboman then he must be made to suffer unjustly?

The world over leaders in civilised democracies are insulted and even threatened on a daily basis on the social media with little or no consequencies. President Biden had been called names especially by supporters of the erratic ex-President, Donald Trump. And President Macron had suffered physical attacks yet justice had been allowed to prevail in all fairness without any executive meddlesomeness.

President Macron was recently attacked with an egg by a disgruntled man as he visited a hotel in Lyon. But the attacker was simply arrested. He could be charged and convicted even though the young French leader minimised the attack by asking to speak to the young man in private to know his grievances!

Few months ago the same Macron was hit with a right hand by a youth protesting against his policies. The aggressor was jailed in a jiffy for four months. He was neither manhandled nor detained indefinitely without trial. Just imagine for a split second what would happen to an unruly fellow who pelts Buhari with an egg or slap him outright?

Come to think of it if Buhari were to die now would it be said that he had died young or untimely? As a septuagenarian if he were to kick the bucket the question is: what is the average life expectancy of an average Nigerian? Having messed up our collective lives as a dictator and now as a ‘democrat’ would many Nigerians (including those in Katsina state) not rejoice, like we did when Gen Sani Abacha died, in the event of his departure from this world?

While we wish President Buhari longer and healthy life from the bottom of our hearts we must condemn the animosity towards citizen Akoma. Let the young man be freed and be warned to desist from making such costly ‘joke’ in the future. We refuse to accept that deep down in his heart the young pharmacist meant contracting an assassin outside our shores to terminate the life of the President.

Why refuse him bail? Or is the ‘offense’ not bailable? Is he a terrorist? Or a threat to the larger society? Is he not a victim of state judicial terrorism? Your guess is as good as ours.

Comrade Omoyele Sowore is following this despicable matter. He was reportedly in court yesterday as the young man was presented before a Judge, Justice Giwa Badejo, in Abuja. The Publisher and human rights activist was said to be angered by the ignorance displayed by the prosecution. He reported that the case was being frustrated so that Akuma could suffer more.

Taking to his Twitter account the executive SaharaReporter confined to Abuja by the judicial gang in the FCT in active collaboration with AGF Malami had harshly criticised the crooked procedure that played out featuring stark ignorance and lack of professionalism.

Comrade Sowore disclosed how the police lawyer’s citations were in shambles and how the ignorant lawyer did not know how to cite the NWLR (Nigeria Law Weekly Reports) instead calling same “NORL”! He was saved further embarrassment following Justice Giwa’s question concerning the ‘NORL’ and the ‘mumu’ lawyer’s WhatsApp message to his superiors.

The former presidential aspirant equally reported how the arrest and persecution of the pharmacist had impacted negatively on his family ruining the life of his old father who had spent all his savings on the case and now indisposed having been struck with stroke!

This particular case amounts to state intimidation and persecution. Who would prosecute President Buhari for killing and wasting thousands of lives of young Nigerians? Who would dock him for the killings done by his Fulani herder-brothers and the terrorists up north? Who would judge him for the billions he had borrowed (and still borrowing) when he leaves office?

President Buhari and his security and judicial goons holding pharmacist Solomon Akuma hostage must be prevailed upon to release the young man. He has suffered enough and deserves to be free. His case is a cry for justice!

Like it? Share it!
Malawi Court slaps Chinese national Yun Hua Lin with 14-year jail term for wildlife related offences < Previous
Guinea’s military outdoors plans towards a return to civilian rule Next >
Recommended stories you may like: