You are here: Home » Malawi » Health » COVID-19: WHO expresses hope worst of Omicron wave is over

COVID-19: WHO expresses hope worst of Omicron wave is over 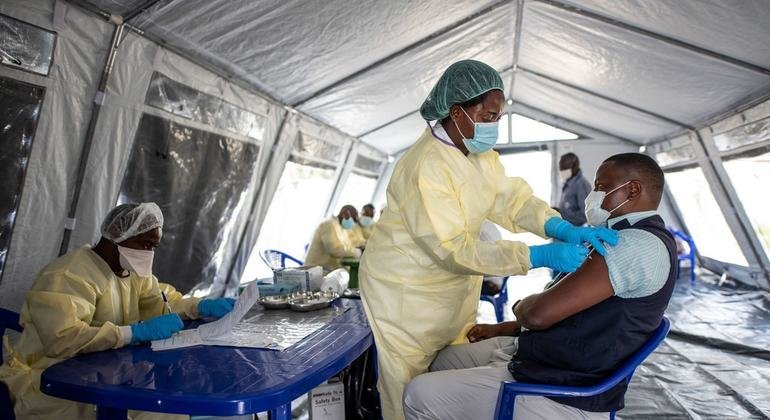 Briefing journalists in Geneva, Tedros Ghebreyesus said that more than 18 million cases were reported last week, and the pandemic itself is far from over, so no country is out of the woods yet.

The number of deaths remains stable, but the agency is concerned about the impact the variant is having on already exhausted health workers and overburdened health systems.

“I remain particularly concerned about many countries that have low vaccination rates, as people are many times more at risk of severe illness and death if they’re unvaccinated”, Tedros said.

Omicron may be less severe, but for the WHO chief “the narrative that it is mild disease is misleading, hurts the overall response and costs more lives.”

Tedros noted that the virus is circulating “far too intensely with many still vulnerable” and argued that, for many countries, the next few weeks remain critical.

Over the weekend, the UN-backed COVAX facility delivered its one-billionth dose of vaccine.

Tedros said he was proud of the milestone, but believes it’s essential to keep forging ahead with distributing shots fairly, across the world.

“Vaccines may be less effective at preventing infection and transmission of Omicron than they were for previous variants, but they still are exceptionally good at preventing serious disease and death”, he explained.

For him, immunization continues to be “key to protecting hospitals from becoming overwhelmed.”

The WHO chief also highlighted the importance of tracking new variants, like Omicron, in real time.

Tedros believes that the pandemic is “nowhere near over” and, with the incredible growth of Omicron, new variants are likely to emerge.

So far, more than 7 million whole genome sequences from 180 countries have been submitted to GISAID, a global mechanism that provides open access to genomic data and was initially set up to track flu.

Using all that data, new formulations of vaccines are being developed and assessed for how they perform against different strains.

Despite those efforts, Tedros is concerned that the world will enter “a second and even more destructive phase of vaccine inequity”, if it doesn’t change course.

Omicron continues to sweep the 🌍. I remain concerned about countries with low vaccination rates, as unvaccinated people are many times more at risk of severe illness & death. I urge everyone to do their best to reduce risk of infection & help take pressure off health systems. pic.twitter.com/CymL7Vxvel

For Tedros, the challenge, once again, is that high prices and limited supply means access is limited.

WHO is currently working with its partners in ACT-Accelerator to negotiate lower prices with manufacturers and ensure supply will be available for low- and middle-income countries.

Next week, the WHO Executive Board, which is made up of 34 Member States, will meet to discuss the world’s health challenges.

The pandemic will remain at the forefront, but Member States will also be discussing the devastating impact of the pandemic on other health issues, and how the backsliding can be stopped.

According to the WHO chief, the agency willbe working to accelerate progress on negotiations around a global pandemic accord.

On a final note, Tedros noted that January is Cervical Cancer Awareness month.

The main cause of the disease is infection with high-risk types of human papillomavirus (HPV), an extremely common family of viruses that are transmitted through sexual contact.

There are, however, vaccines that protect against high-risk HPV types, which means it should be one of the most preventable and treatable forms of cancer.

On Monday, Serbia announced that this year,it will introduce a vaccination programme against HPV, joining the 116 nationswho already do it.

Like it? Share it!
Sudan urged to stop unnecessary use of force against protestors < Previous
SA: Growth expected in edible insect and mopane worms sector Next >
Latest News from Maravi Post
Recent Posts: The Maravi Post