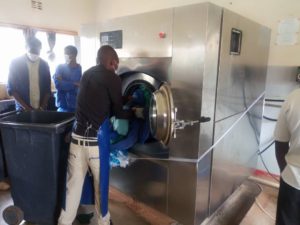 The hospital has been facing problems in washing beddings and other fabric as it used to take most of its laundry to Nkhotakota hospital during weekends.

According to Kasungu’s Acting Director of Health Services Dr Emmanuel Golombe the hospital has been incurring costs in taking its laundry to another hospital because of lack of a reliable washing machine.

Said Golombe: “Since 2015 the hospital has been suffering in as far as doing laundry is concerned because of lack of a good washing machine. The new heavy duty machine from CRWB has come as a rescue as we will also save some costs.”

The machine is expected to have a life span of six years.

CRWB board Chairperson Apostle Dr Madalitso Mbewe said he was happy the board is answering the need in the area it is operating in.

“We serve the community of Kasungu and we found out that the hospital here has a problem with their laundry. So as part of our Corporate Social Responsibility we thought that we should come in and help,” said Apostle Mbewe.

Apostle Mbewe said the issue that the hospital has been seeking assistance from another hospital sounds primitive but was happy that CRWB has come to rescue and will make sure that there is running water in the district since the machine needs water for it to work.

CRWB has recently come under fire from the resident of the Kasungu town because of persistent water problems but the situation has improved as dams have filled up.