In Buliisa district alone, situated on the north-eastern edge of Lake Albert, the flooding is thought to have resulted in more than $250,000 worth of economic losses.

The cancellation of the ferry from Wanseko to Panyimur, the region’s biggest fish market, hit trade hard, whilst the loss of electricity, which was cut off when power lines were submerged, worsened the economic impact.

“Our people were used to electricity. One could easily rent a house connected with electricity and start up a business”, says Robert Mugume, a local councillor. “But when power was disconnected, it became very difficult, because one needed to buy solar power equipment, which is quite expensive, and many people were rendered jobless”, he says.

Nyanjura Nyangoma’s family lost their home in the floods

Some people were killed when the waters rose, whilst others were made homeless and had to migrate elsewhere.

Many of Buliisa’s poverty alleviation projects, based along the shores of Lake Albert, were severely disrupted, whilst unemployed young people attempting to earn money in spite of the flooding, faced a further obstacle, in the face of the Ugandan Government’s operation to combat illegal fishing on the lake.

In a bid to help local youth earn money in Buliisa, Mr. Mugube has proposed that the central government consider providing them with fishing nets and other equipment that meet legal standards, but are currently too expensive for many.

The floods have also affected people who were previously making a healthy income in the region.

Olwinyi Mugusa, for example, had two rental homes and a successful fishing business based around the Kyabarangwa landing site, in Hoima district.

He has since lost everything. Like an estimated 30,000 others from Kyabarangwa and neighbouring landing sites, he and his family members are now Internally Displaced Persons (IDPs), temporarily hosted on Bakibiro community land, on humanitarian grounds.

This is Butyaba fish factory in Uganda, and it has been closed after being submerged in water because of Lake Albert’s rising water levels.

Those who have remained on the shores of Lake Albert, are striving to get back on their feet, as they adjust and wait for the flood waters of Lake Albert to recede.

Unfortunately, their prospects are bleak: this year’s rainy season, in March and April, could see the waters rise to the levels seen at the start of the current floods, according to Uganda’s Ministry of Water and Environment. 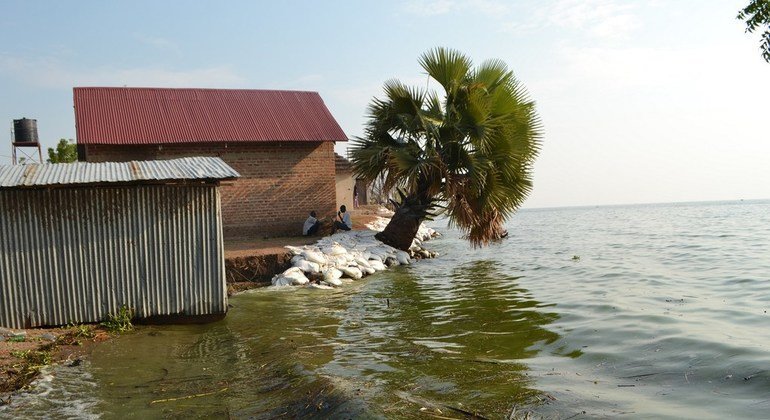