The West Bank city of Bethlehem marked the start of the festive season Saturday by lighting up its Christmas tree in Manger Square. The annual event was attended by thousands of spectators, as well as Palestinian politicians and featured a firework display, traditional Palestinian dancing, and a nativity show. Christians believe Bethlehem, which is situated in the occupied West Bank, was Jesus’s birthplace. Before the outbreak of coronavirus, thousands of tourists and pilgrims traveled to Bethlehem every year visiting the city’s many holy sites including the Church of Nativity, supposedly built on the exact spot where Christ was born. The city has been hit hard by the coronavirus pandemic. Israel, which tightly controls movement in and out of the West Bank, effectively suspended foreign tourism for almost two years after the Israeli government closed its borders to foreign nationals in March 2020. The Israeli government briefly reopened the border in November, but backtracked on this decision following the outbreak of the omicron variant. 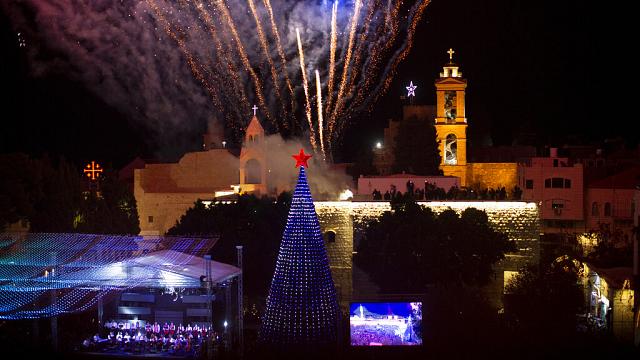