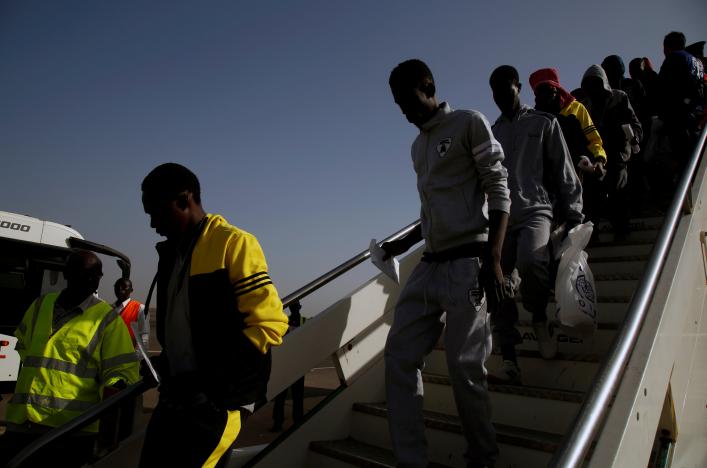 
Gambia’s government has refused to accept its own citizens deported from Germany.

Over 2,000 Gambians who migrated to European countries such as Germany have overstayed their asylum visas.

They are now expected to be repatriated to their country but the Gambian government is refusing to let them in.

The first batch of Gambian migrants who have exhausted their asylum appeals was to arrive in Gambia’s capital, Banjul on September 1.

But a Gambian official from Foreign Ministry told reporters that the government will not take in the deportees.

Gambia has cited security concerns and the inability to reintegrate those being deported as reasons for its decision.

But a Ugandan expert in international law, Gawaya Tegulle told DW that Gambia’s action is unlawful.

“The action per se by the government of the Gambia has no place under international law. It is illegal before we start even to list the demerits of the circumstances surrounding the decision,” Tegulle said.


An African policy analyst, Emmanuel Bensah also told DW that Gambia is right to be considering several factors, including the pandemic, before taking in the migrants.

“The Gambia’s president cannot be sure of the COVID-19 status of those who are being deported. In addition, the Gambia is a small country, and the health system has not been coping so well with COVID-19,” Bensah said.

He also revealed that the arrival of migrants could be an added burden for the country.

“The other thing is that the Gambian government since 2017 has become quite unpopular. The euphoria connected with Barrow winning the presidency when ECOWAS intervened to get rid of [former President Yahya] Jammeh has died down,” Bensah said.

In retaliation the European Union is said to be planning to tighten visa requirements for Gambian nationals.

There are almost 7,000 Gambians without residence rights in Germany alone.

In 2019 the United States of America imposed visa restrictions on Ghana after it failed to issue traveling documents to its citizens awaiting deportation.

The American government said Ghana was not complying with international obligations “regarding issuance of travel documents.”

The visa restrictions imposed on Ghana was however lifted in 2020 after an agreement was reached to return some 7,000 deportees said to be guilty of immigration offences, including abusing the terms of their visas.