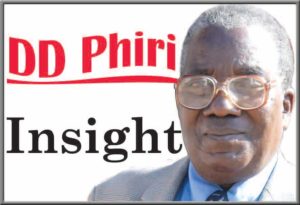 On Friday, March 22, The Maravi Post carried an article revealing that  the late Phiri who was a columnist for both The Nation and The Daily Times has been in the hospital for the past three weeks.

The family member  told this publication that DD Phiri’s ailing health has been lack of appetite with no or little food consumption and for almost a week he has been panicky breathing.

DD Phiri was this week on Oxygen-dialysis machine.

Dr. Phiri was instrumental to historical and economic analysis of the country

Phiri was born in Mzimba, Malawi. He went to Blantyre Secondary School and Livingstonia and London.

The columnist later moved to England and studied Economics, History, and Sociology at the London School of Economics (part of the University of London).

Phiri  received an honorary doctorate from the University of Malawi.

He worked as a diplomat in the foreign service and retired from the civil service in 1976.

The historian was the Principal and Proprietor of Aggrey Memorial School.

The late DD Phiri is expected to lead to rest on Monday.

Share
Facebook
Twitter
Pinterest
WhatsApp
Previous article
Of desperate MCP Chimwendo plot to foil UTM Party manifesto launch in Dowa….MCP will never be democratic
Next article
T.B. Joshua has given a “prophetic warning” to the Nigerian government concerning the handling of “inconclusive elections” in the nation.