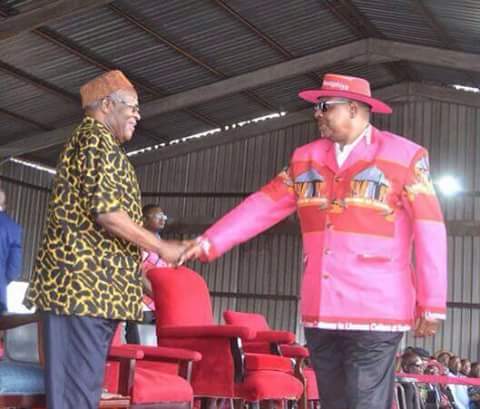 Malawi is never short of useless political maneuvering that only serves a few people’s pockets and political careers. After the government sponsored live TV crying of Chief Director for public sector reforms in the Office of the President and Cabinet (OPC) Seodi White and other paid actors, former Malawi President Bakili Muluzi has come up with a new political movie for the entertainment starved Malawians.

Malawians are demanding the resignation of the Malawi Electoral Commission (MEC) chairperson, Justice Jane Ansah, for presiding over a rigged and poorly handled election. Street demonstrations have been taking place across the country since the results of the elections were announced in May 2019.

The former president has expressed desire to mediate on the post-election’s issues. In his letter to organizers of the unprecedented demonstrations, Muluzi said, “I feel obliged and duty-bound that we find a solution to curtail the prevailing situation, initiate conversation and dialogue.”

The first meeting between Human Rights Defenders Coalition (HRDC) members and Muluzi took place today in Blantyre. According to reports on Zodiak Online Facebook page, Muluzi asked the members to ‘slow down’ and suspend demonstrations which are scheduled on Thursday this week. Muluzi promised to meet Democratic Progressive Party (DPP) President Peter Mutharika on the Jane Ansah resignation demands. However, the HRDC members declined to cancel the demonstrations. So predictable!

This is a Nollywood movie that will yield nothing but entertainment for Malawians and news for the media. By the end of the so-called negotiations, nothing will change. Nothing will be achieved because in any negotiations, you must address the core issues. Most importantly negotiations need the highest decision makers in both camps to be involved, not proxies.

If Muluzi really wanted to intervene, he could have first met Mutharika and advised him to fire Ansah. Telling Malawians to wait for seven days for him to meet the arrogant Mutharika is a waste of time. It can only work to cool off demonstrator’s spirits, something DPP desperately wants.

But Muluzi has an agenda. The negotiations will make him relevant to Mutharika and the DPP. Yes, Mutharika and DPP, not Malawians. Muluzi has never retired from politics. He is still active. He only changed the mode of doing politics because of consecutive political defeats.

He supported Malawi Congress Party’s (MCP) John Tembo for president and failed. He tried his son Atupele in 2014 and failed. In the 2014 general elections, Atupele Muluzi campaigned on the popular message of ‘agenda for change’ but joined the ‘no change team’ of DPP in a governing coalition after losing the elections. To serve the senior Muluzi’s interests, Atupele was quietly loyal to corrupt Mutharika for five years.

After failing to get what his father wanted in the numerous alliances talks that he held with DPP and other parties, Atupele stood for president this year and failed again. Because Muluzi has always pushed for his personal interests without regard to the consequences of his actions on UDF, the party has moved from eighty-five members of parliament in 1994 to ten in 2019.

Since UDF got weaker in the 2019 elections and his son lost his seat in parliament, Muluzi has no bargaining power to remain relevant. The call for negotiations is just a quest to be relevant to DPP. You don’t have to trust my analysis. Just look at who is excited with the negotiations! It’s DPP! They know they will buy time and let the heat cool off.

Muluzi’s current political maneuvering has three goals. To save himself from the corruption trial, get Atupele a job and use the remains of UDF as a bargaining power to get what he wants. Muluzi is currently answering fraud charges of K1.7 billion ($12 million) which was deposited in his personal account during his presidency. The government alleges the money was public funds diverted to the former president’s personal account. Muluzi’s goal is to have his corruption case dropped by government. He is therefore stuck with DPP.

Muluzi has one more interest; to make sure that no person from the central and northern regions ever rule Malawi. This is one of the most unfortunate reasons why he covertly supports Mutharika. Any Malawian can become President if he is qualified, has ability to improve the economy and has the interest of Malawians at heart. Regionalism should always be condemned.

Muluzi’s call for negotiations is not in the interest of peace. It’s a delaying tactic to give DPP breathing space and achieve personal objectives. Such greed and time wasting should not be tolerated. Jane Ansah must resign without wasting time on unnecessary negotiations. Besides, there are people with more credibility than Muluzi who can hold real talks on the other electoral issues that Malawians are concerned with.

Patseni Mauka
Patseni Mauka is a Contributor at The Maravi Post and a Political Commentator in Malawi. His hard hitting Political views have a strong following on Social Media
RELATED ARTICLES
Environment