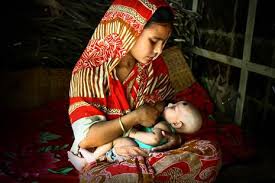 Principal Nutritionist at the Ministry of Health, Sylvester Kathumba, advised working mothers to pump breast milk for their babies in place of milk substitutes.

Kathumba said breast milk has all the necessary nutrients that a baby requires to grow in healthy; while store-bought milk formula is hard on babies because baby’s digestive system is immature and unable to break down all the particles contained in the formula.

He said if a mother pumps milk, the baby can enjoy the benefits of breastmilk if the mother is not able to breastfeed baby.

According to the 2016 Demographic Health Survey findings, Malawi’s number of exclusively breast-fed babies has dropped to 61 percent from 71 percent.

“The drop in the number of breastfed babies, is a set back to the goal of Malawi Vision 2020, which seeks at attaining sustainable economic and social development, food security and nutrition improvement, most importantly end infant mortality, which is at 42 in every one thousand babies,” he said.

Kathumba added that pumping breast milk can help in increasing the number of exclusively breastfed babies.

Agreeing with Kathumba, Chairperson and founder of a group called “Pumping the Way to Go” Mlezi Tsilizani said pumped milk can be kept for four days in a refrigerator, for four months in a freezer and six hours at room temperature.

According to www.babycentre.co.uk breastmilk pumping, also called expressing is a way of taking breastmilk from the breast without the baby needing to suckle from the mother; the mother can do this by using hands, a manual pump or an electric pump.

Tsilizani however discouraged mothers from freezing breast milk; she said freezing destroys some of the milk’s antibodies, which are essential for the baby to help it fight infections; however, frozen breastmilk is still healthier for the baby than formula milk.

According to the World Health Organization, breastfeeding has cognitive and health benefits for both infants and their mothers; it is especially critical during the first six months of a baby’s life, helping prevent pneumonia and diarrhea, which are the two major causes of infant deaths.

Like it? Share it!
Malawi Govt removes tax on recreation centres’ building materials; targets hotels, lodges of over 50 rooms < Previous
Msowoya miserably failed; will Mia pass the litmus test? Next >
Recommended stories you may like: