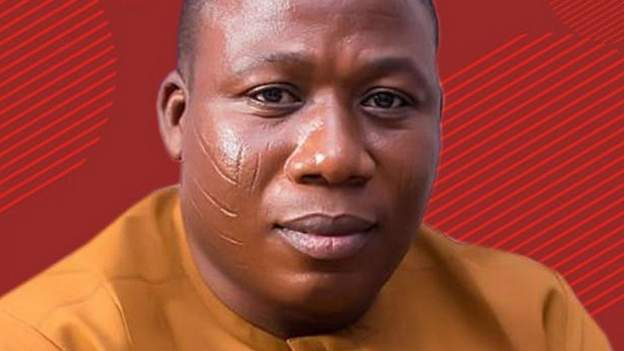 Nigeria’s Yoruba separatist leader Sunday Adeyemo has been arrested in Benin, after he was declared wanted for allegedly stockpiling arms.

Mr Igboho was arrested by security forces at an airport in Benin’s capital, Cotonou.

He was reportedly heading for Germany when he was arrested for repatriation.

Nigeria’s Department of State Services (DSS) announced that it was pursuing Mr Igboho after fleeing a raid on his residence.


The agency said it recovered a cache of arms from Mr Igboho’s house in the raid amid gun battle.

“The gun duel which lasted for an hour offered Igboho the chance to escape,” the agency said in a statement adding that two of Igboho’s men were “gunned down” during the exchange of fire.

Mr Igboho has been actively campaigning for the formation of an independent state of Yoruba in south-western Nigeria.

The separatist leader has denied allegations that he is inciting violence against Fulani herders in southern states.

Nigerian authorities have in the past arrested the leader of the Indigenous People of Biafra (IPOB) group, which also supports the secession of the south-east of Nigeria, Kanu.

The Biafra separatist group leader was arrested abroad after four years on the run and brought to Nigeria, where he is facing trial for “terrorism”.

Nigerian has over 200 ethnic groups and a population of 210 million.

The three largest groups in the country are the Hausa-Fulani in the north, the Igbo in the south-east and the Yoruba in the southwest.

Like it? Share it!
Innocent Musing By Stanley Imhanruor Esq. < Previous
Morocco opens investigation as detainee at US Guantanamo bay is transferred home Next >
Latest News From Malawi
Headlines From: The Maravi Post