You are here: Home » Regional » Top News » Malawi’s May 21 polls postmortem; Why President Mutharika re-elected despite 62% Malawians rejected him?

Malawi’s May 21 polls postmortem; Why President Mutharika re-elected despite 62% Malawians rejected him? 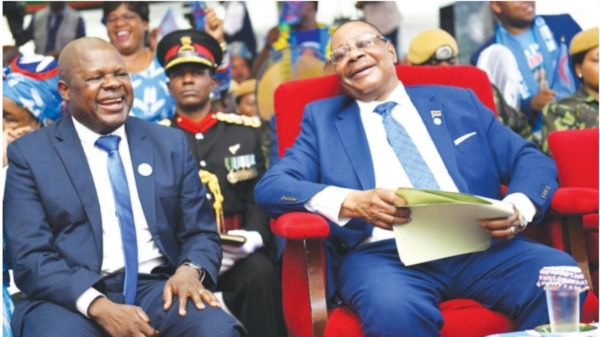 LILONGWE-(MaraviPost)-Malawi President Peter Mutharika under Democratic Progressive Party (DPP) was on Monday, May 27, 2019 re-elected for the second term (next five years).

This reflects that about 62% of the nation’s population rejected Mutharika and his DPP government.

President and DPP has won only with 158,000 votes and it’s easy to swap these votes where millions are voting., only God knows beyond our eyes.

Malawians generally wanted a a change of leadership but greedy among oppositions has cost the nation greatly. The nation lost an opportunity for the better.

The opposition has itself to blame for the split vote and politics of hatred. Its time they really soul search as their actions of a contested election is to paint a bad image of this country.

This they want to hold the future administration at ransom as an illegitimate government which stole an election.

That’s a very dangerous way to take as ordinary Malawians will suffer.

Therefore there is nothing like it, DPP executed the Landslide strategy, step by step information gathering,  and secured victory.

On the other hand MCP and UTM thought they were big individually mostly using intuition judgments such as; Mia will give us the Lowershire votes, JB Eastern Region compounded with Mia Islamic factor, Khumbo the Northern Region vote while we consolidate the Central Region.

Lastly UTM being the splinter party from DPP will help us shake the South.

This was suicidal, instead of uniting and face the mighty DPP as a combined force.

Today you are busy complaining why? MCP gets overconfidence on useless assumptions.

1.Malawi need some reforms on electoral laws, and the constitution in general:

(a). Let the Malawi Electoral Commission (MEC) CHAIR be elected by Parliament and not the President.

(b). During elections, let the MEC Chair be acting president.

(c). Let there be a 50+1 policy to ensure a government by the majority. Let the elected DPP leadership reflect the true choice of the majority and democracy.

MCP is always so unlucky and a victim fraudster shennanings. I can understand them for being bitter. The guys have had enough. They cant stand the reality of being robbed their hard-fought victory right in front of their noses. But let them express themselves in peace.

Malawi politics is so attached to regionalism and tribalism. And the biggest victim of this reality is Dr SAULOS KLAUS CHILIMA. The guy, a proven performer as he is, preached change. He reached every corner of the country with his massage of hope and better future, only for Malawians to reject him on grounds of “kuvotera wakwawo.” Central region and the CHEWA for MCP, Southern region and the Lhomwe for DPP.

The MEC 2019 team is a disgrace. They way they handled the elections from the word “Go” leaves alot to be desired. From voter registration, to management of registration equipment, to the actual management of elections especially the response to queries and allegations of serious irregularities, all testify of elections whose credibility is so questionable.

SAULOS KLAUS CHILIMA is political heavy weight. Within 10 months of forming his movement, he reached to every corner of the country with his agenda.

It’s not a simple thing to convince a million voters within that short period of time. You can love him or you can hate him, but you cant ignore him. You just got to love his spirit of hard work, great levels of confidence and smart vision. SKC machine.

Thanks to ATUPELE MULUZI’s poor leadership, UDF is gone; dead and buried. For the first time, he has lost his parliamentary seat, and has seen his stronghold being penetrated by the DPP.

SIDIK MIA is not a political giant he is thought to be. He is not a heavyweight. Cant even come anything closer to the late Gwanda Chakuamba on his influence in Lower Shire. MCP might have been misled if they thought that he would bring them the much needed vote from the Lower Shire.

Dr Lazarus Chakwera is a liberal leader, though leading a conservative movement in the name of MCP.

The guy needs to be commended for spearheading reforms within the party that have seen the party making some notable inroads in other regions, like the south. With the much love from his MCP fans, the guy could rule the country in the future, if the MCP constitution does allow him to contest for the third consecutive time.

Malawians are fast catching up with voter apathy. Against a projected figure of 8 million, a total of 6.8 million people registered to vote. And out of these, about not more than 5.7 million people voted. Perhaps people might have lost confidence in government or the general system.

It is difficult for a divided opposition to dislodge a ruling party, even if it might have under-performed and lost some popularity.

One would wonder whether these politicians really do politics to serve the people. Because, if it was about national service, an electoral alliance to dislodge a non performing government wouldn’t have been a problem.

When it comes to propaganda and strategy, DPP is always in a class of its own. These guys are always ahead of every other grouping with their strategy, whether good or bad.

You cant simply beat them. Look, while this time around everyone was busy monitoring computers and wireless telexes, then boom!!!! Tippex and marked ballots.

Malawians will have to bare another five years of leadership that is characterized by fraud, corruption, nepotism, tribalism, poor delivery of social services.

Like it? Share it!
Humble Everton Chimulirenji next Vice President of the Republic of Malawi < Previous
Malawi-Flames Coach challenges players to shine against Namibia in Cosafa cup Next >
Recommended stories you may like: