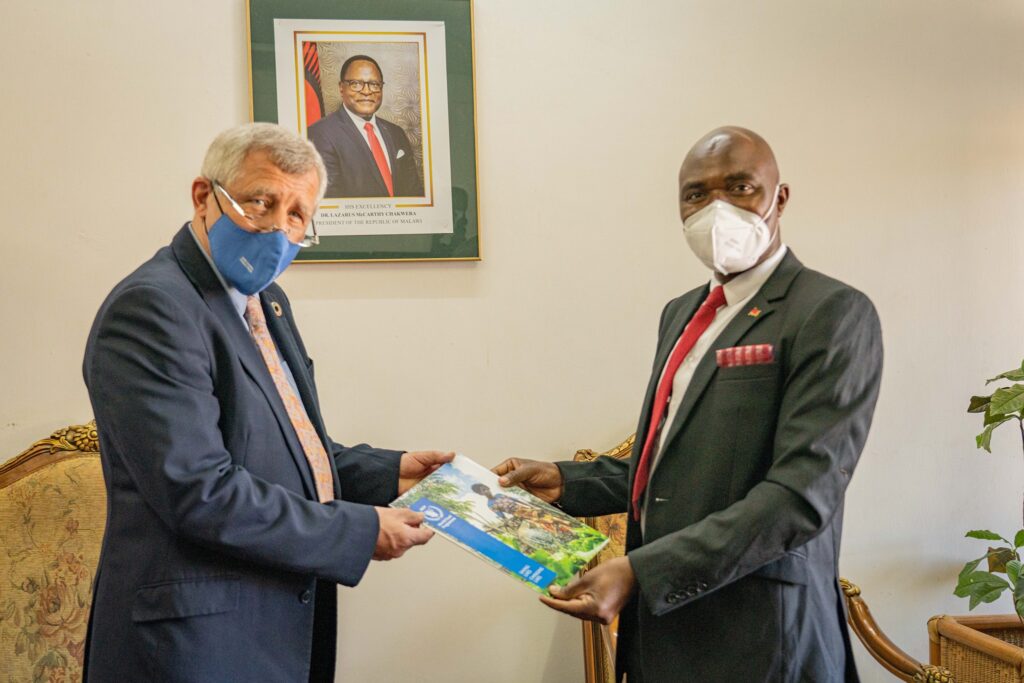 The World Food Programme (WFP) has a new boss in office, the organization discloses in a statement.

The statement says Paul Turnbull is the new country representative replacing Benoit Thiry who has retired.

Turnbull presented his letters of credence to Malawi’s Minister of Foreign Affairs, Eisenhower Mkaka and reiterated WFP’s commitment to working with the Government to save and change lives while strengthening capacities to respond to climatic shocks.

“WFP appreciates the collaborative relationship it has with the Government of Malawi in addressing food and nutrition security in the country. In the last few years, Malawi has been affected by serious droughts and floods.

“WFP will endeavor to strengthen capacities to respond to climatic shocks in line with the United Nations Sustainable Development Cooperation Framework and Malawi Vision 2063,” Turnbull said as quoted by MBC.

In his remarks, Mkaka commended WFP for its humanitarian support to Malawi including provision of food assistance, resilience building, livelihoods activities and provision of school meals to learners.

The Minister underscored the shift by WFP towards integrated resilience to address the structural causes of hunger, emphasizing how the approach will ensure that farmers graduate from perpetually relying on humanitarian assistance and become food sufficient.

Benoit Thiry started his mission in September 2017. Previously, he spent four years as Country Director for WFP in Niger. He first joined WFP as the Head of Programme in Burundi and has worked with WFP for 25 years now!

WFP began its operations in Malawi in 1965.Through a multi-sectoral approach with resilience and development programmes, WFP is working with the Malawi Government and other partners to address the underlying causes of vulnerabilities and drivers of food insecurity in the country.

While responding rapidly to disasters remains a priority, a holistic response to reduce vulnerabilities and impact of climatic risks is gradually building a more food and nutrition secure and resilient Malawi.

Maneno Chimulalahttps://www.maravipost.com
I am a journalist, educator, and activist with passion for telling stories about social justice, sports and political issues. I graduated from Mzuzu University. I started my career at the Maravi Post online publication in 2012 as an intern while in college. Upon graduating from Mzuzu University I was offered a job as Sports Reporter because of my background as a goalkeeper and rose to the position of sub editor. I also had a short stint with Nyasatimes, Malawi Punch and Malawi Digest. Over the past seven years, I have worked intimately with rural organizations and communities in Malawi on human rights, girl child education and grassroots development projects. With an academic background in education, I also volunteer as male champion for girls’ education under Girls Empowerment Networks (GENET) in Malawi’s South West Education Division (SWED).
RELATED ARTICLES
Education