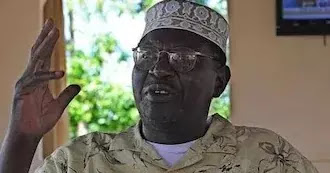 NAIROBI-(MaraviPost)-The apparent feud between the Obama brothers took a fresh twist on Monday, September 2 after Malik accused the former US president of lying to him.

Malik, who has never made it a secret his feelings towards his brother Barrack Obama, took to Twitter to cry foul over the former Head of State’s new acquisition.

Barrack Obama’s brother Malik cries foul after former US president buys KSh 1.5 billion house. Photo: StandardIf the tweet is anything to go by, the older Obama accused Barrack of purchasing a swanky KSh 1.5 billion mansion despite telling him he was broke.

“A rising tide lifts all boats but not in Barack Obama‘s case. Buys a US$15 million home and tells me to my face that he’s broke. Slick folks” he wrote on Twitter.

Malik was reacting to an initial report by TMZ which claimed his Barrack was gearing up to acquire a 29-acre Martha’s Vineyard estate with a beachfront, 6,892-square-foot main house and seven-bedrooms.

Typically, Twitter users were unimpressed by Malik’s sentiments as they took to remind him his brother, who had the enviable title of (POTUS), did not owe him anything.

The feud between the two brothers dates back to the 1990s before any of them was a formidable individual in society.