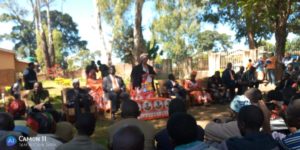 Malawi Former President Dr Joyce Banda has appealed to Chiefs in Dedza District to be non-partisan following the claims that some chiefs are shunning opposition rallies.

Dr Banda was speaking in Dedza on Monday 29th April during a meeting she held with the chiefs from traditional authority Kasumbu and Kamenyagwaza to draw emphasis on her alliance with Dr Lazarus Chakwera.

She said chiefs were appointed by God not politicians hence they should remain neutral  because some politicians can mislead them by abusing their powers.

“As the  country fast approaches 21st May I urge you to be non partisan in the way your handling political parties. I understand you work with the ruling government but that does not mean you are enemies to the opposition parties.

“You have suffered enough and its time to change Malawi for better and this can only be done if you vote for Dr Lazarus Chakwera,, said Banda”.

Banda then said come 21st May Malawians ,should vote for Dr Lazarus Chakwera

As MCP-PP alliance has put in place measures on how they will develop rural livelihoods.

In his remarks group village head Chinyamula concurred with Dr Banda saying  chiefs in the country need to give  equal opportunity to all parties that are to hold rallies in their respective areas.

Chinyamula emphasized that Malawi is a Democratic country hence people should not live in fear with any ruling party.

Maravi Post Author
Today's Opinion · Op-Ed Columnists · Editorials · Op-Ed Contributors to the Maravi Post· The Maravi Post accepts opinion essays on any topic. Published pieces typically run from 400 to 1,200 words, but drafts of any length within the bounds of reason will be considered.
RELATED ARTICLES
Top News