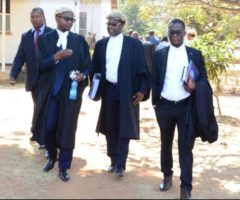 The Malawi Electoral Commission (MEC) lawyer, Tamando Chokotho, has reported to Malawi Law Society (MLS) that he is receiving threats from lawyers of the Vice President Saulos Klaus Chilima following the electoral body’s resolve to appeal against the K7 billion legal fees that was awarded to the vice president and president Lazarus Chakwera in the presidential election case.

In his letter to MLS dated Septmber 17, Chokotho says after receiving orders on August 10 and 12 from the High Court Registrar’s office on assessment of costs related to the election case with instructions to seek review of the costs, he was then communicated to that he should ignore the review process and proceed to pay.

Chokotho alleges that this communication was from lawyer Khumbo Bonzoe Soko through a text message sent on August 27 between 19: 42 hrs and 21:23hrs that read: “Ankolo..perekani dollar izizi za ma review izi tichedwa nazo” (uncle, just pay the money. Review process is just a waste of time.)

He claims that he ignored the message and proceeded to file the review application in accordance with the instructions from MEC, his client.

Chokotho alleges that on September 8 at around 18:00hrs, he received a call from another lawyer Marshal Chilenga, who also asked him to drop the review proceedings and just pay.

MLS President Burton Mhango has confirmed that he has received the complaint and action will be taken after investigations.

MEC filed an application for review of the K7 billion legal fees the court awarded lawyers for President Lazarus Chakwera and Vice President Saulos Chilima in the presidential elections case.

Mec’s Director of Legal Services David Matumika Banda said the commission felt that the amount is not a true reflection of costs that were reasonably incurred by the Petitioners.

“The application for review [of the legal fees bill] was filed,” he said.

Following the assessment by registrar of the High Court and Supreme Court of Appeal Agnes Patemba, lawyers for Chilima who was first petitioner had been awarded K2, 314,184,550.00 for the case heard in the High Court sitting as a constitutional court.

“We strongly believe that these costs are exaggerated and that as Malawians we should not accept these unjustified costs that have been awarded by the court,” Kajoloweka said.

Lazarus Chakwera and Saulos Chilima challenged results of the presidential elections in the May 21 2019 tripartite polls, a case they won on February 3 this year.

MEC and former president Peter Mutharika appealed the ruling but the Supreme Court of Appeal upheld the High Court ruling on May 8.

In her separate rulings, Patemba said the sums had been reached after considering arguments presented from both sides of the two cases.

She noted that the petitioners had too many lawyers not all of who could be taxed but instead she decided to tax 5 lawyers from each petitioner.

Maneno Chimulalahttps://www.maravipost.com
I am a journalist, educator, and activist with passion for telling stories about social justice, sports and political issues. I graduated from Mzuzu University. I started my career at the Maravi Post online publication in 2012 as an intern while in college. Upon graduating from Mzuzu University I was offered a job as Sports Reporter because of my background as a goalkeeper and rose to the position of sub editor. I also had a short stint with Nyasatimes, Malawi Punch and Malawi Digest. Over the past seven years, I have worked intimately with rural organizations and communities in Malawi on human rights, girl child education and grassroots development projects. With an academic background in education, I also volunteer as male champion for girls’ education under Girls Empowerment Networks (GENET) in Malawi’s South West Education Division (SWED).
RELATED ARTICLES
Malawi