You are here: Home » Regional » Top News » Fears for more tsunamis after hundreds killed in Indonesia

Fears for more tsunamis after hundreds killed in Indonesia

JAKARTA–More deadly tsunamis could strike the Indonesian coastline in the coming days, authorities warn, as the volcano which triggered the weekend’s devastating wave continues to erupt.

According to CNN, at least 373 people have died from the tsunami, which struck the Indonesian coastline without warning Saturday night. Hundreds more are injured and more than two dozen remain missing.
In the wake of Saturday’s disaster, Indonesian President Joko Widodo ordered Indonesia’s Meteorology, Climatology and Geological Agency (BMKG) to purchase detectors which would provide “early warnings to community.”
Eyewitnesses described fleeing for their lives as beachfront homes were swept away in the wave, which is thought to have been caused by underwater landslides following the eruption of the Anak Krakatau volcano.
According to local media, the wave reached as high as three meters (10 feet).
Sutopo Purwo Nugroho, a spokesman at Indonesia’s National Disaster Mitigation Agency, warned Sunday that more tsunamis were possible as long as the volcano remained active. 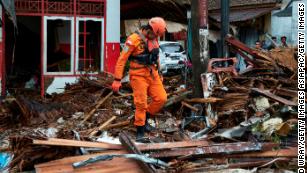 “We are cautioning the people to remain cautious,” Sutopo said. “Agencies are still continuing to analyze the root cause … the Krakatau volcano continues to erupt, which could potentially trigger another tsunami.”
Adding weight to his warnings, Sutopo raised the issue of Indonesia’s outdated tsunami buoy network which he said hasn’t worked properly since 2012.
“Vandalism, limited budget, technical damage caused no tsunami (alerts) at this time,” he said on his official Twitter account.
A lack of warning was also blamed for the high death toll in Indonesia’s October tsunami which killed more than 2,000 people on the western coast of Sulawesi.
The Maravi Post has over one billion views since its inception in December of 2009. Viewed in over 100 countries Follow US: Twitter @maravipost Facebook Page : maravipost Instagram: maravipost

Like it? Share it!
Suspected DPP officials robbing  voters registration card numbers in Mzuzu < Previous
TB Joshua – The Shocking Truth About Why His Church Is Growing Fast Next >
Latest News from Maravi Post
Recent Posts: The Maravi Post

The Ivorian artist transforming used phones into works of art