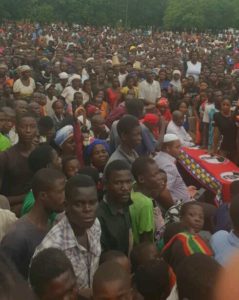 A sea of people flooded Mtowe School ground in Marka on Monday when Abida Mia was Guest of Honour during a political rally organised by the Opposition Malawi Congress Party (MCP) in Nsanje-South Constituency.

Mammoth crowds accorded the firebrand politician Abida Mia, a hero’s welcome as she arrived in the company of other MCP officials to rejuvenate thousands of supporters and assure people of the neglected area of the new day of redemption coming with the party’s leader, Lazarus Chakwera through the May 21 Tripartite Elections.

Mia, alongside other MCP officials like Regional Chairman for the South, Peter Simbi and National Deputy Director of Research, Iryias Karim, who is also legislator for Chikwawa-South Constituency, introduced and outlined the redemptive five points in the “Chakwera Super Hi5” while directly reflecting the points to the needs of the people in this forgotten hard-to-reach part of Malawi.

During the function, Abida Mia who is also wife to MCP First Vice President, Muhammed Sidik Mia, unveiled Markson Kadalinga as the MCP Parliamentary Candidate for the area in the fourth coming elections.

She therefore urged the people especially all eligible voters to rally their support behind the MCP President, Dr. Lazarus Chakwera and his runningmate Sidik Mia and of course all MCP candidates by voting for them to ensure that the party forms the next government.

The MCP officials are for the whole week putting up heavy strides in various constituencies of Nsanje district to garner support ahead of the May 21 National Elections.

Like it? Share it!
Shocking!!!! RSA teacher impregnates five students < Previous
Six new ambassadors present Letters of Credence to Malawi President Mutharika Next >
Recommended stories you may like: