My Take On It: Malawi’s disturbing video of man beating child is a haunting display of low depths of humanity 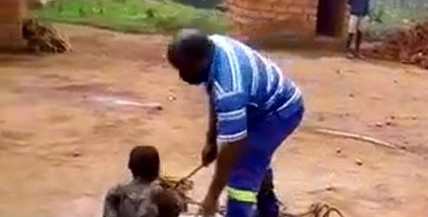 “If anyone should cause one of these little ones to lose his faith in me, it would be better for that person to have a large millstone tied around his neck and be drowned in the deep sea. Matthew 18:6

Parents, do not treat your children in such a way as to make them angry. Instead, raise them with Christian discipline and instruction. — Ephesians 6:4

When the video first landed in the WhatsApp inbox, it started like another forward that people are fond of clicking away to entertain, shock, or simply to pass information that was important, although the majority of messages are usually frivolous. But when I checked who the sender was, I caused myself to watch the video in its entirety. It is a repulsive capturing of the cruelty children endure, but also a capture of the complicity of human rights abuses that are rampant in the country that instantly renders society guilty as the abuser.

The video depicts a little boy, close to nakedness, a rope tied around his neck, An older man turns out to be his father holds a thick stick and walks the son around a village compound, shouting at him. The videographer does a great job spanning the area to show that there were other adults that were looking on. The man pushes the child to the ground and starts to beat the young boy with the stick. He then picks the boy and lifts him above his head and throws him to the ground after being threatened that he will be pulled tied to a car.

The last time people had ropes tied around their necks was during the infamous slave trade in the 1500s to 1800s. While the Ntcheu Police did well to arrest and imprison the man, the child taken to the hospital, many questions are flying in many people’s minds, what did the child do that warrants such public and degrading, inhumane display of cruelty? How is it that people around remained bystanders, looking on as if this was some form of entertainment? Does the boy have a mother? Where are the local authorities such as the village headman or headwoman? Most importantly, while the videographer can be commended for capturing the abuse highlighting this horrific cruelty, he or she too is as complicit in the wrongdoing as are the other villagers.

There are five points that need to be considered and addressed, and if the village authorities do not have the capacity to handle the matter, the Ministry of Gender and Child Welfare must certainly weigh in on this matter, it may not be a solitary incident, maybe there are other bandits in other villages. This is a child abuse matter and Malawi being a signatory of the Convention of the Rights of the Child that states recognizes “that the child, for the full and harmonious development of his or her personality, should grow up in a family environment, in an atmosphere of happiness, love, and understanding,” ensuring that the “best interests of the child as a primary consideration.”

Secondly, the abuse is criminal, and by use of the came CRC, the State, through the Courts may decide on separation if it is deemed “necessary in a particular case such as one involving abuse or neglect of the child by the parents.”

The third and fourth issues are on the traditional leaders, villagers, the mother, and other relations in the village, and the videographer. How is it that all the onlookers around, no one thought to intervene or rush to call the authorities, but for two painful minutes a child is beaten and thrown to the ground like a bag of maize? The threat to tie him to the car is alarming.

The man was apprehended, and while it is best that he is given a speedy trial, in earnest,  he should be examined by psychiatrists; his behavior is not normal. If it turns out that he is in fact, a psychiatric case, merely placing him in prison for a few years, will not cure his medical disposition. He will merely return to the community and continue his abnormal behavior; this sometimes has dearer consequences.

The fifth point on the matter is the court case. There are times the courts dole out minimal sentences that are excruciating to the victims and survivors of criminal acts or felonies. A recent example is that of Eric Ariva, the HIV+ man who was paid to have sex with women and girls. His sentence was pitifully minimal in relation to the offense. Many of the girls and women with whom he had sexual relations could potentially be infected with HIV, and one confirmed to have tested positive for the HIV.

Before this, sometime in the 1990s. a man found another man defiling his 13-year old daughter. When the matter was brought to court, the defiler’s father pleaded with the judge to be lenient and that he would teach his son to behave. He was given a six-month suspended sentence. A group of women and I approached then High Court Judge Duncan Tambala, who granted us an audience to petition him. A judicial review was made, and the defiler was sentenced to time in the jail

I am not in the habit of telling justices what to do or how to run their courts, nor would I deem it appropriate to influence them in any way, however, a light sentence for this man who flagrantly mercilessly beat and threw a child to the ground, in full view of onlookers and a videographer, needs to be put in prison for a long time.

The psychological damage the man meted on the young boy is a scar he will have for the rest of his life. He may heal physically, but the emotional trauma will forever haunt him. Many people hope that the sentence will be equal to the crime.

Let justice prevail over our land!