No medicines & water in Malawi’s public hospitals in Karonga 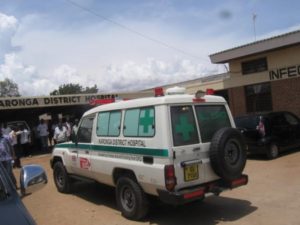 A lot of public hospitals as well as health centers in Karonga the northern part of Malawi operate without basic things such as water, toilets and medicine Maravi Post has established.

This was revealed during the community awareness meetings organized by the Catholic Commission for Justice and Peace (CCJP) under the Karonga Diocese in some health centers in the district.

For instance, residents surround Wiliro Health Center which is 50 Kilometers from the district hospital said the facility has been running without malaria drugs, toilets and water for some years.

Chairperson for Wiliro Health Advisory Committee (HAC) Dan Mtambo disclosed that the health officials in the district fail to explain the main cause of the problems.

“We have been without toilets for almost three years despite the community managed to dig four toilets and brought breaks at the premise. The District Health Officer stopped us to continue constructing it locally saying they will do it themselves but up to now,” said Matambo.

Mtambo also said that the facility is lacking a special room for people who are on ART as they are using antenatal room.

Concurring with the Wiliro community, residents surround Mpata Health Center said they are also facing the problem of Malaria drugs at their area.

It was also revealed that the HAC members in the district fail to do their work which includes monitoring drugs due to lack of knowledge.

However, the community vowed to deal with their duty bears including the district’s health officials to be accountable after opened their eyes by the CCJP.

He said things can change in the public hospitals as well as health centers especially if the community themselves start summoning their duty bearers.

The health and governance project is a one year project carried in three Traditional Authorities normally Kilipula Kyungu and Wasambo with financial support from OSISA.