At Miramar Beach in Peru’s popular resort of Ancon, there are no bathers despite the summer heat. Instead, it teems with workers in coveralls cleaning up an oil spill. Almost a million liters (264,000 gallons) of crude spilled into the sea on Saturday when a tanker was hit by waves while offloading at La Pampilla refinery in Ventanilla, 30 kilometers (19 miles) north of Lima. Its owner, Spanish oil company Repsol, attributed the accident to the swell caused by the volcanic eruption in Tonga, thousands of miles away. Peru’s government has declared the spill of some 6,000 barrels of oil an “ecological disaster” and has demanded compensation from Repsol. The company denies responsibility, saying maritime authorities had issued no warning of freak waves after the Tonga eruption. 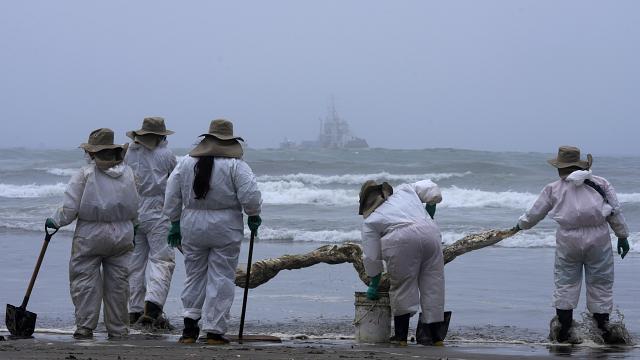