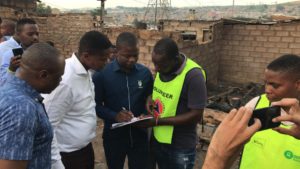 Prophet Bushiri on the site

JOHANNESBURG-(MaraviPost)-Prophet Shepherd Bushiri on Thursday visited residents of Alexandra Park, a high-density in Johannesburg, South Africa, who were affected by shack fires that spread through parts of the area and destroyed at least 352 structures.

The Enlightened Christian Gathering (ECG) leader, who is renowned for his series of philanthropic works, further donated about MK20 million to help, specifically, meet  the education needs of the affected children.

“As you might recall, I have a strong interest in issues to do with children and education. I do understand that in tragedies such as these, we have children whose learning materials have been destroyed, who have lost their uniforms and just so many things.

We are here to stand with families to help their children with their education,” said Major 1 who, a week ago, supported about 15 students in Malawi with school fees.

Bushiri further said he will return to the area next week Tuesday to continue engaging with the families especially in helping them with spiritual and social support.

According to disaster management officials of the area, at least 650 people have been displaced and in need of critical relief supplies, not limited to food, shelter, water, sanitary wear, clothes, blankets, replacement documentation among other things.

As it is, all displaced women and children have been sleeping at a creche while the men and boys are sleeping at a development center.

The collapse of an electricity pylon has made restorative construction impossible