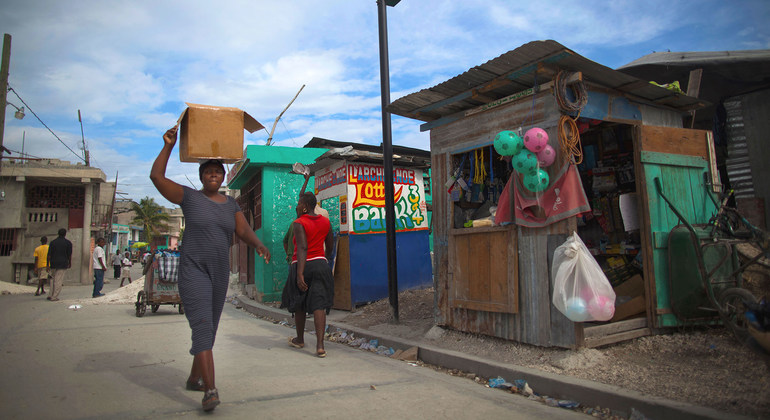 The final report from the Start Free, Stay Free, AIDS Free initiative, issued in Geneva on Wednesday, warns that progress on ending AIDS among children, adolescents and young women has stalled and requires urgent action.

The five-year framework began in 2015 and followed on from a global plan to reduce new HIV infections among children by that year, while also ensuring those living with HIV have access to antiretroviral therapy. The focus was on 23 countries, mostly in Africa.

The total number of children on treatment also declined for the first time, despite the fact that nearly 800,000 children living with HIV are not currently on treatment.

Furthermore, opportunities to identify infants and young children living with HIV early are being missed, as more than a third of children born to mothers living with the virus were not tested.

“Over 20 years ago, initiatives for families and children to prevent vertical transmission and to eliminate children dying of AIDS truly kick-started what has now become our global AIDS response. This stemmed from an unprecedented activation of all partners, yet, despite early and dramatic progress, despite more tools and knowledge than ever before, children are falling way behind adults and way behind our goals,” said Shannon Hader, Deputy Executive Director, Programme, at UNAIDS.

The agency issued the report alongside the United States President’s Emergency Plan for AIDS Relief; the United Nations Children’s Fund, UNICEF, and the World Health Organization (WHO), with support from the Elizabeth Glaser Pediatric AIDS Foundation.

Leave no child behind

The study reveals stark inequalities, as children are nearly 40 times less likely to be on life-saving treatment than adults.  Even though children account for five per cent of people living with HIV, they represent 15 per cent of all AIDS-related deaths.

“The HIV community has a long history of tackling unprecedented challenges, today we need that same energy and perseverance to address the needs of the most vulnerable—our children,” said Ren Minghui, Assistant Director-General of the Universal Health Coverage/Communicable and Noncommunicable Diseases Division at WHO.

“African leaders have the power to help us change the pace of care and should act and lead until no child living with HIV is left behind.”

The report details areas for action, starting with reaching pregnant women with testing and treatment as early as possible, as some 66,000 new HIV infections occurred in children because their mothers did not receive treatment during pregnancy or breastfeeding.

Mothers also should be able to continue treatment and viral suppression for life, while more efforts are needed to prevent new infections among women who are pregnant and breastfeeding.

Lives in the balance

Meanwhile, the report documents progress in preventing HIV infections among adolescent girls and young women, with numbers declining by nearly 30 per cent in the focus countries between 2015 and 2020.  However, the 200,000 who acquired HIV, represent twice the global target for 2020.

Besides disrupting education, school closures due to the COVID-19 pandemic have also affected sexual and reproductive health services for adolescent girls and women, the authors said, underscoring the urgent need to step up prevention and outreach.

“The lives of the most vulnerable girls and young women hang in the balance, locked into deeply entrenched cycles of vulnerability and neglect that must urgently be interrupted,” said Chewe Luo, UNICEF Chief of HIV and Associate Director of Health Programmes.

“We know that rapid gains can be achieved for girls and young women; what is needed is the courage to apply the solutions, and the discipline to implement these with rigor and scale.”

UNAIDS and partners will continue to work together to develop new frameworks to address what they have described as “the unfinished agenda”.

This past June, countries adopted a political declaration to get the world back on track towards ending HIV and AIDS by the end of the decade, which lays out targets for the coming five years.

Like it? Share it!
Ivorian political rivals Ouattara and Gbagbo to meet < Previous
Debate over redistribution of ”ill-gotten” gains seized by French judiciary Next >
Recommended stories you may like: