You are here: Home » Opinion » Sowore And Radical Democracy In Nigeria By Abolayo Afiz Mosope

You may not like Omoyele Sowore for reasons best known to you. But history will always remember him and posterity will forever be kind to him for his contributions to the present day Democracy we are practicing in Nigeria. We might not be enjoying Democratic dividends, but we can’t still but say we are practicing democracy.

Sowore was part of the few Nigerians who risked their lives to making sure we have a Democratic system of Government in Nigeria. Sowore was one of those just like myself who believed that if nothing is done about something, things will remain the way they are.

The young man you’re seeing behind MKO Abiola here is the same Sowore. He was at the forefront fighting against the forces of dictatorialism, injustices, parochialism and tyranny that characterizes in particular the Babangida and Abacha military regime. All he did at the detriment of his precious life just for Nigeria to become a Democratic country where rule of law, constitutionalism and human right of every Nigerians will be respected to the latter. He was doing all these while a vat majority of you (His haters and critics) today were no where to be found. 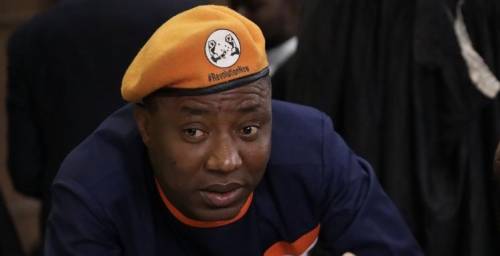 In 1989, Sowore was just 18 years of age then. This guy at his age then took part in Student demonstrations protesting the conditions of an International Monetary Fund (IMF) loan of $120 million to be used for a Nigerian oil pipeline. Among the conditions of the IMF loan was the aim to reducing the number of Universities in Nigeria then from 28 to 5.

As the Student Union Government President of the University of Lagos in 1992. Sowore then was just 21 years of age. At his age then, he led over 2,000 Students in protest against the Babangida regime Government in 1992. During the protest, the police began shooting and seven people were killed in the process. He was arrested, detained, tortured and remanded in prison.

As if that was never enough, Sowore was also involved in the struggle for Democracy to take over military rule from Babangida in June 12 1993. He was actively involve in the struggle that led to the Democratic System we are practicing today. During this struggle, he was arrested on several occasions, faced many detentions with several life threatening treatment of him by military Government officials then.

All these happened to this young man at the age of 18 to 22 years. You now expect someone who has faced and experienced all these in his tender age even with the military dictators, who wasn’t scared of being killed or fear death to now be scared of same under a Democratic rule at the age of 50?

A man like Sowore who refused to be silenced during the military junta will now bow to pressure under a Democratic system? How is that possible?

If we are enjoying Democratic dividends or practicing what real Democracy encapsulates, why should Nigerians be scared to go out to protest peacefully? What’s wrong their right to Assemble? Why should protest be criminalized?

In the Nigeria of today, before you say anything on air or post anything on social media about Government, you have to think about it 20 times so that you don’t land yourself in trouble.

Like I opined earlier, there’s a wide difference between practicing democracy and enjoying Democratic dividends. What we have in Nigeria of today is the former and not the latter. Apparently, people like Sowore wanted both the former and the latter, which of course was never out of place or too much to ask. The day we have both, you won’t see the likes of Sowore and many others on the Street of Nigeria again protesting.

This reminds me of Dante Alighieri of blessed memory. He has said it all. The hottest part of hell shall no doubt be reserved for those who in time of injustices and moral crisis maintain their neutrality.

History and posterity will forever be kind to Sowore for what he has done in Nigeria and still doing. Hate him or like him, that’s your funeral. The Ese-Odo born Comrade, Activist and Pro-Democracy Campaigner has paid his dues.

Like it? Share it!
Guinea: Opposition leader returns home from exile < Previous
Where is Saulos Chilima amid Malawians’ dashing hopes? Deafening silent won’t work for political posturing Next >
Latest News From Malawi
Headlines From: The Maravi Post