HomeDevelopmentUN official calls on Security Council to support a ‘secure, peaceful and...
DevelopmentRegional

“This insecurity is exacerbating an already disastrous humanitarian situation”, said Martha Pobee, Assistant Secretary-General for Africa in the Departments of Political and Peacebuilding Affairs and Peace Operations, pointing out that women and children are the primary victims of violence and growing inequality.

Meanwhile the Joint Force of the Group of Five (G5) – created in 2017 by the then Heads of State from Burkina Faso, Chad, Mali, Mauritania, and Niger to counter terrorism in the region – remains an important component in responding to the insecurity.

Moreover, it is considering a new concept of operations to address the evolving security and humanitarian situation and the withdrawal of Mali.

Meanwhile, she updated that the Executive Secretariat and G5 Sahel components continue to put gender policy into action and boost training for women leaders.

In supporting the G5 Sahel, she said the UN was building regional capacity in improving criminal justice, border security management and the prevention of radicalization and violent extremism, as militant groups continue to expand across the region.

A Nigerien soldier guards a strategic location in Ouallam, Niger.

She informed the Council the UN Stabilization Mission in Mali (MINUSMA) continues to bolster the Joint Force, including by working with contractors to deliver “life support consumables to the four contingents of the Force outside of Mali”.

“Technical and operational challenges remain a matter of concern”, said Ms. Pobee while noting that disagreement between the G5 Sahel Member States, which culminated in the withdrawal of Mali, has further complicated MINUSMA’s ability to support the Joint Force.

A matter of rights

“Defeating terrorism and violent extremism requires a comprehensive response and will not be attained through military gains only”, she underscored.

“It is important that the Joint Force integrates human rights and international humanitarian law into the core of its operations, or risk fostering further breeding ground for violent extremist groups, causing ever increasing suffering for the populations”.

Likewise, counter-terrorism military strategies must be “fully anchored in human rights…[with] the protection of all populations at their core”.

Martha Ama Akyaa Pobee, Assistant Secretary-General for Africa in the Departments of Political and Peacebuilding Affairs and Peace Operations, briefs the Security Council meeting on peace and security in Africa.

The senior UN official stressed the urgent need for “a coordinated breakthrough in our response to violent extremism”.

“If we fail in this effort, the effects of terrorism, violent extremism and organized crime will be felt far beyond the Sahel region and, indeed, the African continent”, she stated, pushing for a “rethink” to approaches.

In the coming months, political dialogue in the region is critical to pursue common security objectives, she said.

While “deeply committed” to supporting a resolution to the current regional tensions, Ms. Pobee said that “only by working together, in a coordinated and complementary manner”, can the multiple challenges ahead be effectively addressed.

In that spirit, the UN, the African Union (AU) and others are supporting an Independent High-Level Panel on Security and Development in the Sahel, aimed “to marshal greater attention and resources on the national, sub-regional, regional, and international level and propose innovative ways to address the security, governance and development challenges in the region”.

While awaiting the Panel’s recommendations, she said she was counting on the Council’s continued support towards a “stable, secure, peaceful and prosperous Sahel”.

“Faced with the growing threats to the region and beyond, we urge the international community to remain engaged in the spirit of shared responsibility and solidarity with the populations of the region”, concluded the UN official.

Eric Tiaré, Executive Secretary of the G5 Sahel, stressed that despite discouragement, Member States should not give up.

Instead, he highlighted the need to double down on ground-level support for the G5 force, while reminding that urgent action is required to stem terrorist expansion.

Zakaria Ousman Ramadan, Chair of the Chadian Centre for Strategic Studies and Prospective Research, maintained that the widening terrorist activity threatens national resources across the region.

He underscored that the G5 needs a new concept of operations, warning that further security and economic deterioration could embolden terrorist groups.

Click here to watch the meeting in its entirety. 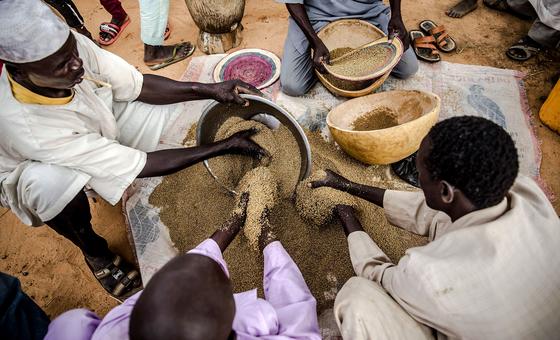 Share
Facebook
Twitter
Pinterest
WhatsApp
Previous article
Invest more in Africa’s Sahel, or risk decades of armed conflict and displacement
Next article
Doses of Ebola candidate vaccines expected to be shipped to Uganda next week: WHO