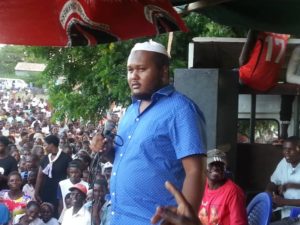 The Opposition Malawi Congress Party(MCP) shadow candidate for Chikwawa South Constituency who is also the party’s deputy director of research, Elias Karim has warned voters in the constituency not to vote for candidates who do not reside in the area  saying such leaders abandon their constituents once voted into power.

Speaking when he launched his campaign at Sangwe football ground in group village headman Sangwe in Traditonal Authority (T/A) Ngabu, Karim said he has fulfilled a number of development projects in the area mainly because he has been residing in the constituency since he was voted as an MP in 2014.

“During this campaign period you will see so many candidates going around in the constituency telling you to vote for them, I would like you to be very careful with such leaders. Where were they all this time. I have always stayed in the constituency and shall continue to be with you here once you re-elect me as Member of Parliament for the area,” said Karim.

Karim is facing stiff challenge from the governing DPP candidate Gerald Viora who has been telling voters in the constituency that they need to stop depending on their MP and be economically independent.

At the launch of his campaign at  Mphonde football ground in Group Village head man Mphonde in the same constituency last month, Viora told people in the constituency that it is not proper for them to be queuing for money at a house of their Member of Parliament.

However, on his part political analyst Rafik Hajat said he believes that most people in the rural areas  do not understand the role of their MPs and hence they tend to rely on him all most in everything .

Elias Karim won as an MP in 2014 under the then ruling Peoples Party of the former president Joyce Banda and has managed to establish close relationship with the people in the constituency who always run to him for help.

At the rally Karim urged people in the constituency to vote for Dr Lazarous Chakwera to become the president for the country as he has named Muhammad Sidik Mia who also comes from the same area to be his running mate.

Maravi Post Author
Today's Opinion · Op-Ed Columnists · Editorials · Op-Ed Contributors to the Maravi Post· The Maravi Post accepts opinion essays on any topic. Published pieces typically run from 400 to 1,200 words, but drafts of any length within the bounds of reason will be considered.
RELATED ARTICLES
Top News