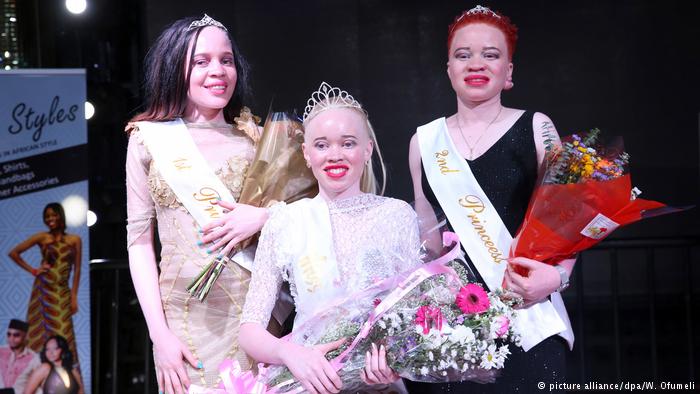 (AP)- In a bid to combat stigma and discrimination against people with albinism, Zimbabwe has put on its Miss Albino pageant that saw a 22-year-old beautiful albino walking out with US$85.

According to her, the achievement will inspire others living with the rare disorder.

“We must continue to advocate for our rights and I hope my win will empower the girl child,” the 22-year-old social work student said.

“I have gone through a lot, but I want people living with albinism to be brave and persevere in life.”
During the event in Harare on Friday night, the contestants had to respond to questions on stage and model a range of gowns and traditional African robes.

Pageant organizer Brenda Mudzimu said a lack of funds had made it difficult to get the initiative off the ground. In the end, the contest only attracted one sponsor, but Mudzimu says she hopes to one day make the event international.

“This will be an annual event which will later be advanced to Miss Albinism Africa and Miss Albinism World because we want to reach all corners of the world,” she said.

In many African countries, people with albinism routinely face discrimination and persecution because of the way they look.

France recalls ambassador to Burkina Faso ahead of pulling out troops