You are here: Home » Business » AU Commission calls for removal of sanctions on Zimbabwe

AU Commission calls for removal of sanctions on Zimbabwe 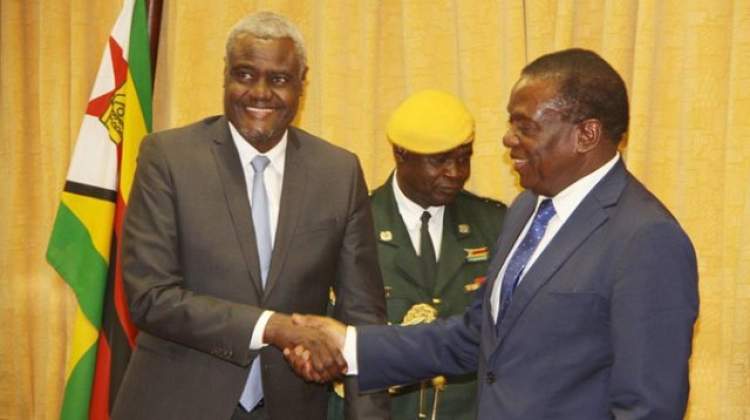 The Chairperson of the African Union Commission Moussa Faki Mahamat has called for the removal of sanctions imposed on Zimbabwe.

In a statement Mr. Mahamat said he was “concerned by the negative impact of continued sanctions against the Republic of Zimbabwe to the country’s socio-economic development and recovery efforts.”

Zimbabweans led by their president, Emmerson Mnangagwa in 2019 embarked on a march to demand an end to foreign sanctions.

The government launched that campaign to make unpopular what it considered at the time foreign sanctions that have crippled the economy.

Government officials including the President insisted that sanctions particularly from the United States of America have made it impossible for any major progress to be achieved in growing and rebuilding the Zimbabwean economy.


The Chairperson said the African Union demands “for the immediate and unconditional removal of sanctions imposed against the Republic of Zimbabwe.

Statement of the Chairperson of the African Union Commission @AUC_MoussaFaki calling for the lifting of all sanctions imposed against the Republic of #Zimbabwe. @ https://t.co/CZI4uDuJyX pic.twitter.com/DmGW8ZvPvV

For over two decades Zimbabwe has struggled to rebuild its economy and sanctions have been blamed largely for this.

At the United Nations General Assembly in New York in 2019, President Emmerson Mnangagwa said his government has made progress in spite “of the sanctions we continue to face.

Sanctions are slowing down our progress, inhibiting our economic recovery and punishing the most vulnerable.

Zimbabwe deserves a new start. Sanctions are a lose-lose game. Co-operation is a win-win.”

The United States has said that sanctions alone cannot be blamed for the state of Zimbabwe.

The mantra of sanctions destroying Zimbabwe’s economy was trumpeted under the late Robert Mugabe who attacked the West of deliberately collapsing the economy.

In 2018, the U.S. government said it had no intentions of lifting sanctions against some key Zimbabwean leaders including President Mnangagwa.

Fresh elections were held after late Robert Mugabe resigned from power but that wasn’t enough for sanctions to be removed, according to the US government.

The US government said it will only lift sanctions when the new government of President Emmerson Mnangagwa demonstrates it is “changing its ways.”

Like it? Share it!
Second biennial sculpture fair opens in Ouagadougou < Previous
Burkina Faso: Ex-soldier admits role in murder of Thomas Sankara Next >
Latest News From Malawi
Headlines From: The Maravi Post