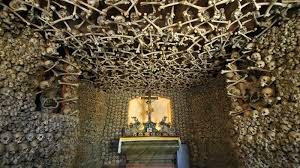 In the heart of the Czech countryside, Kutná Hora houses some of the most beautiful architecture in the whole of Bohemia.

Positioned around 70 kilometers (about 43 miles) east of Prague, this medieval city competed politically, economically and culturally with the capital city during the 13th to 16th centuries, thanks in part to the silver mine boom that enriched the area at the time.

Today, however, Kutná Hora displays a more sedate, yet impressive vision of Czech culture and tradition — hence its UNESCO World Heritage Site status. But amid its Baroque-style buildings and medieval churches, lies an attraction that’s definitely not for the faint-hearted traveler.

Take a short walk through the narrow streets of the small suburb of Sedlec and you’ll reach a quaint yet eerie chapel.

And while the Church of All Saints seems rather unassuming from the outside, lurking underneath is an enthralling tale of mystery and death.

Down a small staircase, in the lower chamber of this Roman Catholic church, lies the Sedlec Ossuary, which is adorned with around 40,000 human skeletons.

Dubbed the Church of Bones, the story behind this grisly attraction begins in 1278, when the King of Bohemia sent the abbot of the Sedlec Cistercian Monastery to Jerusalem. 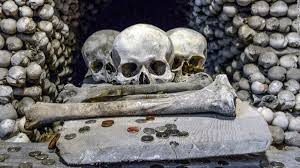 He’s said to have come back with a jar of soil from the Golgotha, the site where the crucifixion of Jesus Christ is said to have occurred, and spread it around the local cemetery.

When news of the “Holy Soil” became public, people from all over the region started requesting to be buried there.

The bones that currently reside in Sedlec Ossuary were exhumed from this site in the 15th century to make room for the town’s expansion, as well as new burials.

They apparently lay stacked in the basement of this Gothic church until 1870, when a woodcarver named Frantisek Rint was appointed to excavate and organize them. The result is spectacularly shocking.

This underground chapel contains a chandelier made entirely of bones, as well as garlands of human skulls.

To the left of the chandelier, sits a coat of arms formed of the bones of the Schwarzenbergs, an aristocratic Czech family who once ruled over the city.

Meanwhile, a collection of human skulls piled on top of each other stands to the right.

Each is accompanied by religious displays arranged out of bone, reminding visitors that the chapel remains a respectful place of worship, despite its rather macabre contents.

Woodcarver Frantisek Rint was appointed to arrange the bone structures in 1870.

“There are still regular masses held in the upper chapel as well as in the lower chapel,” explains Radka Krej?í, Corporate Department Manager for the Sedlec Ossuary. “There are also concerts held inside the church.”

But its popularity has become an issue for residents.

“The ossuary is one of the biggest tourist attractions in the Czech Republic and the most visited in the Central Bohemian region,” adds Krej?í.

“We need to understand that it’s still a Roman Catholic church surrounded by a functional cemetery. Not every visitor respects that.”

Jiri Sobr, a local resident who grew up in the town of Sedlec, is among those who have grown frustrated by the disregard shown by some tourists.

“We have a family grave right in front of the entrance to the Church of All Saints in Sedlec,” Sobr tells CNN Travel.

“It’s a place where we can go and connect with our family that are no longer with us. A place of rest for those who have died, not only a long time ago, but also those who have passed recently.

“I am glad tourists are interested in seeing it, but I would like them to understand this.”

The importance of the ancient site to both locals and the city’s tourism is somewhat reflected in the extensive renovation it’s currently undergoing.

The project is expected to last up to two years, with work already taking place, including bone restoration, in both the interior and exterior.

However, the building remains open to the public during the refurbishment.

The best way to reach this macabre masterpiece is by taking a 55-minute train journey from Prague to Kutná Hora. Trains run regularly, with a day return ticket costing $8.

While Sedlec Ossuary is no doubt one of the stand out attractions in Kutná Hora, there are plenty of other impressive sights in this delightful Czech city.

Within the same Cistercian complex as the ossuary is the Sedlec Cathedral, the Church of the Assumption of Our Lady and Saint John the Baptist.

Built between 1290 and 1320, the cathedral is one of the oldest examples of Baroque Gothic style in the world and has even made it onto the UNESCO World Heritage List.

“It has been 10 years now since the Sedlec Cathedral was opened to the public, and we can see that it is becoming more and more popular with tourists,” adds Krej?í.

“Both of the sights, the ossuary and the cathedral, used to be part of one Cistercian complex and we really want our visitors to see it like that to understand the long history connected with this place.”

Locals have dubbed Kutná Hora’s Chocolate Museum, “the smallest chocolate museum in the world, with the biggest history.”

The cute chocolaterie acts as a homage to all things chocolate dating back to the early 19th century.

During visits, guests are treated to a tour of the establishment, along with chocolate tasting sessions and private candlelit dinners.

St. Barbara’s Cathedral is one of the most recognised Gothic churches in central Europe.

Another Kutná Hora landmark to make it onto the UNESCO World Heritage list, this imposing architectural delight sits atop the old town district.

Its breathtaking surrounding gardens lead down to the famous King’s walk in the forest, overlooking the silver mines that made this city one of the richest in the Czech Republic more than 300 years ago.

The late Gothic cathedral is dedicated to the Virgin Barbara, an early Christian martyr and a patron saint of anyone working in a dangerous occupation, especially miners.

GASK, the Gallery of the Central Bohemian Region, is positioned in the old Jesuit College in the heart of Kutná Hora.

The building itself is magnificent, renovated to a standard that complements the excellent artwork inside.

Exhibitions made up of unique installations and art are held here all year round.

The Kutná Hora Bible was published at this printing house back in 1489.

The Gutenberg Printing House was famously used by Johannes Gutenberg, who is considered the inventor of the printing press, and a scribe known as Martin from Tisnov to print the Kutná Hora Bible in 1489.

To this day, the book remains one of the most significant first prints in the world.

This museum offers visitors a unique insight into the printing presses of old through its fascinating “History of Printing in Kutná Hora” exhibition.

There are also various interactive workshops available and participants can even make and take home a souvenir from their visit.