Omoyele Sowore’s attempted murder yesterday at the Unity Fountain, Abuja ordered by General Muhammadu Buhari brings to the fore how we will remember the blood thirsty dictator.

Nigeria is at war. The war began 2015 when General Buhari became president. But we have the impression that nothing is happening around us. Do you consider the reign of terror unleashed by Buhari as moon light play? Do you also not notice we are surrounded by genocide being carried out by Buhari and his Fulani terrorists? 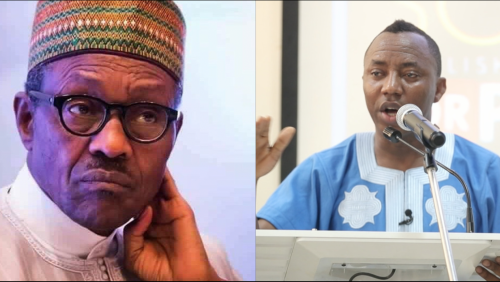 It is an open secret that Sowore is a prime target of Buhari’s tyranny for well known reasons that need no rehash. Sowore remains the most visible  albatross on the neck of Buhari and his evil regime. Buhari as a blood thirsty dictator, is known for mixing dark and the comic, combining fancy cuisine of torture and genocide. He has carved a niche for himself as Nigeria’s foremost dictator who relishes in the absurd and the monstrous, the funny and the horrifying so entwined and indivisible.

Like all dictators, Buhari is known for oppression and massacre of his own citizens. Buhari continues to entertain the world with disturbing humor of savagery and strange obsession. The firing of machine gun on #EndSars peaceful youth protesters. The carrying out of summary arrests and detentions. The kidnapping and manhunt of Sowore, journalists, critics, acitivists are no more a figment of our imagination. It is the reality of Buhari’s world of torture and tyranny.

It is an irony of fate that Sowore who is an incurable optimist in one Nigeria was subjected to such brutality and barbarity. Nonetheless, Sowore, a man with the lion heart, unquestionable integrity, untarnished dignity, and contagious hope remains undaunted and with unyielding conviction that a new Nigeria is possible. But majority of us disagree with him. We are fed up with the malady of the mad men without specialists ruling Nigeria. We have since gave up on Nigeria and we are on our way out.

The last two years of Buhari will witness unprecedented shoot downs of peaceful demonstrators and mass slaughter of critics and separatist agitators. For now, there’s no shedding the carapace of dictatorship by Buhari the terror!

Like it? Share it!
The Death Of Ahmed Gulak, By Reuben Abati < Previous
China abolishes law banning parents from having two children: Increases limit to three Next >
Latest News From Malawi
Headlines From: The Maravi Post