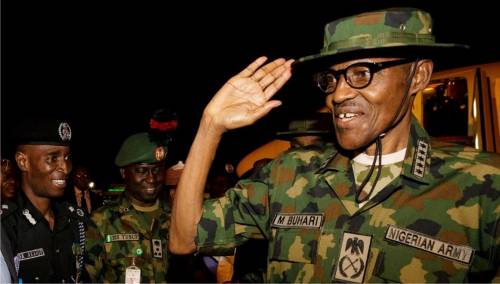 This past week, the deaf, dumb, and illiterate General Muhammadu Buhari went on a road tour comedy show with his another signature irrational and silly tantrums.

Speaking through one of his interpreters of maladies, Alhaji Mohammed Bello Shehu, the dumb, “lifeless” General Buhari said : “… So those calling for separation or restructuring some of them I will say are very naive or even mischievously dangerous. Those agitations for restructuring are ignorant of war and its consequences because Nigeria is a dominant force in West Africa.” Yeah, you’re right! Nigeria is not only a dominant force in West Africa, but in the world for the wrong reasons: World’s poverty capital. World’s most dangerous place to live. World’s terrorists capital. World’s most unrepresentative democracy. The list goes on.

Buhari as a brute stark illiterate, doesn’t know the meaning of restructure and self-determination. Merriam-Webster dictionary explains in simple language that restructure is “to effect a fundamental change in (as an organization, system).” Self-determination: “Determination by the people of a territorial unit of their own future political status.”

Does anything suggests war in the definitions  of the two terms? Which part of restructure or self-determination Buhari doesn’t understand? Who the hell is Buhari to determine our political future? Don’t we have the right to call for fundamental, better still, revolutionary change to make Nigeria better? Why is Buhari so deaf and daft to reason and reality?

Buhari said because Yorubas and Igbos have properties in the north, break up is impossible.. Dum! dum! dum! So, when Nigeria breaks up, those left in the old Nigeria cannot live, do business or have properties in Oduduwa and Biafra Republics? How come Buhari’s wife, Aisha Buhari, formerly of Aso Rock address, is able to own properties in Dubai and has even permanently relocated there? Similarly, why is it possible for Buhari’s ministers, appointees, and state governors to have properties in US, UK, Germany, Canada, and other world capitals?

Buhari’s threat of war cannot stop the will of Yoruba and Igbo people to have their own country. No one can force us by decree or by war to live where Fulani blood suckers will continue to kill, rape, rob, and possibly exterminate us. Yoruba land is not a game reserve for Fulani nomadic lunatics. We have better things to do with our lives. We don’t subscribe to the brutish Stone Age life that Buhari and his Fulani terrorists cherish.  No Buhari or any Jupiter for that matter, can stop us from leaving the slaughtering field known as Nigeria. Our departure is underway.