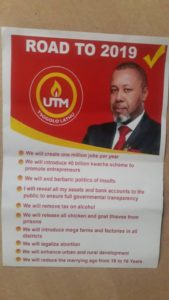 Chilima and UTM Flyer that has been distributed in three major cities of Malawi during the launch; Lilongwe, Blantyre, Mzuzu

In an ever-ending personal crusade to surprise us all, Malawi vice president Sailos Chilima  who is also the leader of United Transformation Movement (UTM) is at it again, bombarding the length and breadth of the country with oneiric pledges, in a desperate effort to gain traction.

Why desperate? Because the majority of pragmatic, knowledgeable people clearly realize that Chilima is actually more of a ‘quack’, than a realistic solution to the problems that our country is facing.

Let’s take his ‘one million jobs in one year’ promise for example. When journalist Zeinab Badawi grilled Saulos Chilima on the BBC Hard Talk regarding this very issue, Chilima failed to provide any details on how he would manage such a feat in an economy this small.

Happy Chirwa, an analyst speaking on the public broadcaster ‘Malawi Broadcasting Corporation’, said that one of the largest companies in Malawi employs 4,000 people. ‘Illovo is not a new company. It has been in Malawi for more than 50 years. It obviously did not employ all the 4,000 people within its first year of operation’.

Chilima also claims that he will create a MK40 billion fund that will give MK200,000 to 200,000 people who are willing and able to start a business.

His argument is that each of these 200,000 people will employ 5 people. This is actually quite comicotragic, since realistically, there is no way a business with a capital of MK200,000 can employ 5 people. Then again, reality is not something that Chilima bothers himself too much with; who cares about realistic expectations and feasible strategies when you can promise manna from heaven and get away with it?

Nevertheless, it is not really surprising that Chilima keeps saying things that are merely fantasies. It almost looks like Chilima was forced into this venture without an actual agenda. His priority at the moment is his ambition to be president. But for him to get the job, he has to tell us things.

And in his naivety, he thinks that promising things we do not really need such as bullet trains is something that Malawians will buy into.

Not to mention that in many cases, Chilima has been promising things that have already been implemented like the Indian hemp trials and the Green Belt initiative.

This clearly demonstrates an overwhelming ignorance and a risible hubris.

In fact, where it seems that he has his own, supposedly progressive ideas, he says things that are nothing but fantasies and not really needed by the people of Malawi. When he makes sense, he has copied the manifestos of the old parties.

Now, it is even widely discussed that Chilima plans to legalize abortion in an effort to reduce maternal deaths and illegal abortions; we can already bet that the Catholic church is not a big fan of this idea.

Like it? Share it!
25 life insights for better living with others < Previous
Nigerian dad gives daughter contraceptive to prevent pregnancy when he sleeps with her Next >
Latest News From Malawi
Headlines From: The Maravi Post