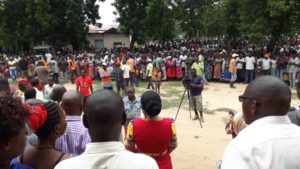 NSANJE-(MaraviPost)-The governing Democratic Progressive Party (DPP) candidate who failed in the October 17, 2017 Parliamentary By-elections in Nsanje- Lalanje constituency, Gladys Ganda had on Thursday attempted to disrupt the hand over ceremony of relief maize that was brought to Admarc Camp by firebrand charitable politician, Abida Sidik Mia.

Ganda who in the by-election had lost to the Malawi Congress Party (MCP) candidate Lawrence Sitolo stormed the Admarc Camp with a group of youths clad in DPP clothes and started inviting the flood victims to come to her so she could address them.

This happened while Abida Mia was addressing the flood victims.

Interestingly, the flood victims started booing her and chanting songs calling her a “failed politician” and “prostitute” who still clings in the home area of her late husband Sam Ganda who was former Member of Parliament for the area.

Seeing people booing her and calling her names, Mrs Ganda climbed on top of the car sponsored to her by the DPP and started pleading with the people to come to her.

The crowds ignore her and to avoid conflict, Abida Mia moved from where she was addressing the people to where a truck load of maize was packed for the presentantion ceremony.

Crowds of flood victims and supporters followed Mia to the truck, singing songs in praise of her family charitable organisation, the Sidik Mia Foundation and for her swift response to assist the flood victims before anybody from government came to assist.

However, the handover ceremony of more than 250 bags of maize went on smoothly as Abida Mia along MCP Legislator for area, Lawrence Sitolo and MCP Regional chairperson  for the South, Peter Simbi managed to create smiles on the faces of scores of people affected by floods.

Filled with shame, the apparently panicking Ganda sought hiding in her car before speeding off from the camp.

On the previous day, officials at the camp complained that Ganda had come to the camp and took away 15 bags of rice meant for flood victims to her house while all flood victims were watching.

Therefore, her return to the camp had greatly angered the flood victims as they would not believe the woman who so much needed their votes in the May 21 elections could stoop so low by taking donation of food meant for flood victims for her personal consumption.

Meanwhile, Ganda whom the DPP government is supporting to reclaim Nsanje Lalanje in order to continue the legacy of her late husband was given a job in one the parastatals so that she can be compensated for her loss in the October 17 by election after all she had resigned from her well paying job as a banker to try politics.

Efforts  to get Ganda’s reaction on the claimed plot to disturb relief food item distribution proved futile for several attempts as she could not pick her mobile phone.