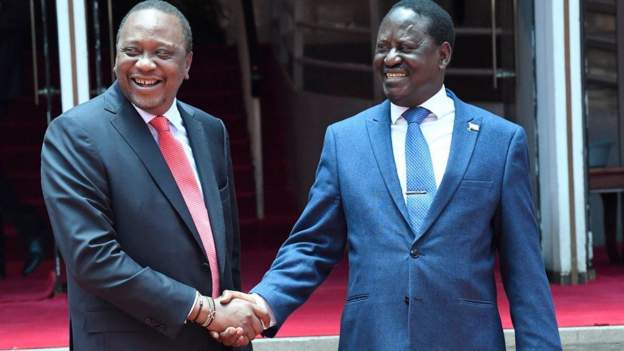 Kenyans will be going to the polls to elect a new president on August 9, 2022.

President Kenyatta has now urged his supporters to back Mr Odinga’s bid since according to him, he has the best interests of the country at heart.

Mr Odinga is expected to contest as president under the Azimio la Umoja (Swahili for “pledge of unity”) alliance.

The alliance is made up of 10 parties, including his Orange Democratic Movement and Mr Kenyatta’s Jubilee.

The president has said that Mr. Odinga rather understands where the country was heading, and would he would be at peace to hand him the “leadership mantle”.

President Kenyatta and his deputy Ruto have not been in good terms since he reconciled with Mr Odinga in the aftermath of the 2017 election.

The two political rivals held a rare meeting in 2018 and resolved to let go their differences as they called for peace.


In a short joint press briefing at the time, Raila Odinga said “In the past we have given a lot of attention to institutional reforms in the hope of changing our country. The time has come for us to confront and address our differences.”

“My brother and myself have come to say this dissent must end. We’re all sailing in this one ship we must come together and remove the water that’s sipping into our ship before we all sink.

“We have agreed to unite the country and we say that the divide ends here,” Odinga added.

Raila Odinga boycotted the re-run presidential election in October of 2017 and declared himself the “people’s president” in 2018 which sparked political tension in Kenya.

Odinga was then accused of attempting to overthrow a legitimate regime following his inauguration as “people’s president”.

Like it? Share it!
Malawi CSOs swiftly call for sitting President’s immunity removal < Previous
Six Nigerian footballers affected by Russia-Ukraine crisis Next >
Recommended stories you may like: