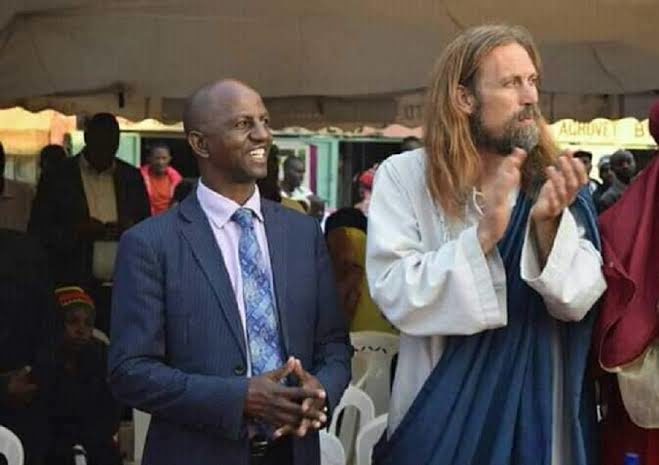 NAIROBI-(MaraviPost)-Authorities in Kenya have deported a man being paraded in the country as Jesus Christ and they have arrested the pastors who invited him and convinced their followers he is the real son of God.

Two church pastors invited the Caucasian man to the East African country and informing their followers that he is Jesus Christ of Nazareth.

The Caucasian went around taking money from Kenyans to perform miracles and secure seats for them in heaven.

The self acclaimed Jesus Christ has been identified as Michael Job who is an actor. Job is also an evangelist and president of Jesus Loves You Evangelistic Ministries.

A twitter user, @DeSaylor1 had shared the photos of Job dressed like Jesus and claimed that the pastor presented his visit to the church as the return of Christ

The event was said to have happened in the small Kenyan town of Kitengela.

Religion is an emotional thing for many Africans, sometimes relegating reasoning.

Social psycho analyst have hinted that incidence such as this are pointed to the state of mind of a people and the conscience.The situation is driven by the need for wealth and fame in a poverty stricken continent.

In the past years, Job has worked with Evangelist Daniel Kolenda and Reinhard Bonnke with Christ For All Nations, the ministry of Daniel Kolenda.

Kenyan government has reportedly deported the fake Jesus and they have arrested the dubious pastors for questioning and possibly prosecution.

Like it? Share it!
Are Atheists Intellectually Dishonest? < Previous
Bishop Bvumbwe defends Malawi’s Interfaith forum formation….disputes claims being aligned to Gvt Next >