You are here: Home » Religion » Are Atheists Intellectually Dishonest?

A tweet by a self-described Christian author, philosopher, and apologist, Rob Robinson, has prompted me to revisit theists’ impressions of atheists and atheism. Too often, pious minds lash out at atheists in an attempt to demonstrate their faith in God. People who claim to be devout present themselves as honest, and as persons with integrity by the mere fact of believing in a god. They make it seem as if the mere fact of believing in a deity confers intellectual and moral integrity on a person. It does not. Theists accuse non-believers of lying to themselves, or of wallowing in self-deceit. In light of this persistent prejudice, it is important to take a critical look at the tweet by Robinson. Recently he posted on his twitter page:
“According to the word of God, there are no atheists. They know God exists, but they lie so that they can live the way they choose. Jesus said that people will not come to Him because they love their sin. God has left us overwhelming evidence. Atheism is intellectual dishonesty”.
First of all, it is completely absurd to try and make sense of atheism using the lens of theism. Or to think there could strictly be an integral place for nonbelievers within the life world of many persons of faith no matter how fair-minded they claim to be. Robinson clearly stated that atheism was a mark of intellectual dishonesty. What made him think so? Why did he assume that atheism is logically fallacious and that theism was a demonstration of intellectual sincerity and sound reasoning? What makes somebody who claims to believe in God mentally sound? 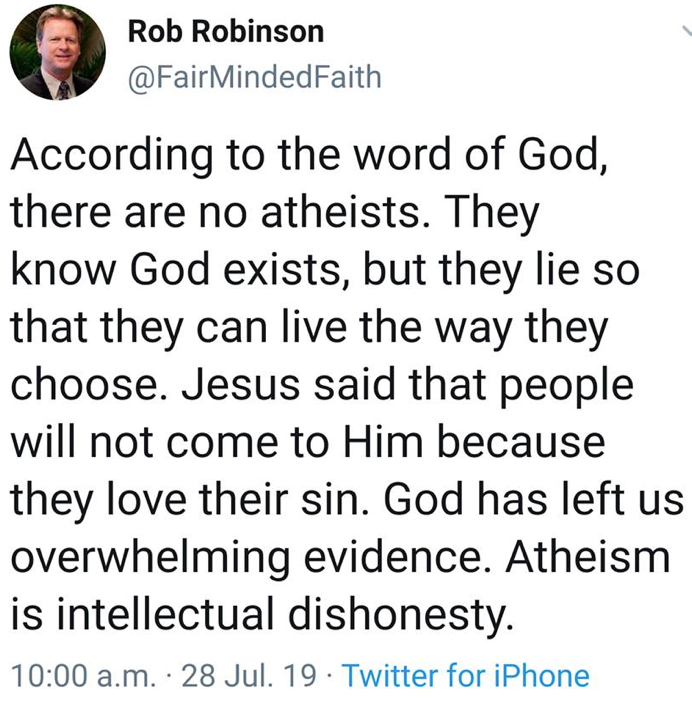 Now Robinson said that, going by the word of God, atheists did not exist. Well, which word of God was he referring to? This is because there are many Gods and many words of God out there- Christian, Islamic, Hindu, traditional African and Confucian. As a Christian apologist, he was referring to the Bible? Now, is the Bible the word of God? Are provisions in the Christian scripture dictated by a God, the Jesus God?
Does God speak? Did Jesus say what they said that he said? Has God ever spoken a Word and in which language? I mean, what does it say about the morality of a person who calls the word of humans, the word of God? What does it say about the mental and intellectual state of a person who claims that a spirit spoke a word or some words? Is the person or his outlook intellectually honest? Robinson did not stop at these mischaracterizations, half-truths, and falsehoods, he went further to use this word from questionable sources to judge disbelievers and to dismiss them as a fraud. It is like saying, based on a book written by a fake author, so and so do not exist? So, who is fraudulent? Who is lying and deceiving? Just imagine that statement by Robinson: God has left us overwhelming evidence. Which God? Which evidence? And where? Like prophets, Robinson spoke with a high degree of certainty as if God called him up one day and categorically told him the evidence he had left behind. Unfortunately, as a Christian apologist, Robinson is not disposed to critically examine his theistic beliefs or to admit that theism is inherently contradictory.  Belief in God does not make a consistent narrative. Theism is a matter of faith, not a matter of fact. Theistic position is not agreeable with evidence, intellectual honesty and logic. Robinson needs to rethink his mistaken notions and misrepresentations of atheism and atheists.
The Maravi Post has over one billion views since its inception in December of 2009. Viewed in over 100 countries Follow US: Twitter @maravipost Facebook Page : maravipost Instagram: maravipost

Like it? Share it!
Sunday Adelaja-The man who sponsored Bisola Johnson Against TB Joshua < Previous
Kenyan Govt deports “Jesus”; arrests pastors who invited him Next >
Latest News From Malawi
Headlines From: The Maravi Post