Dr. Richard Brennan, WHO Regional Emergency Director, said that the catastrophe has pushed the country to the brink and that diseases are rampant.

Over 540,000 malaria cases have been reported. Other health threats include increasing cases of diarrheal diseases, an ongoing dengue fever outbreak, measles and diphtheria.
— Dr. Richard Brennan

He added that a food crisis is looming, the economy is deteriorating, and winter is fast approaching. The eight million flood-affected people who need health assistance require essential medical supplies and access to essential healthcare.

“From July to early October 2022, over 540,000 malaria cases have been reported. Other health threats include increasing cases of diarrheal diseases, an ongoing dengue fever outbreak, measles and diphtheria.

He said that among the biggest concerns were high rates of severe acute malnutrition.

WHO expressed concern that, in the context of multiple other competing demands, the international response has not risen to the urgent needs of  flood-affected communities.

More than $81.5 million is needed to respond to the health crisis in flood-affected areas of Pakistan to ensure coordinated delivery of essential healthcare services, efficient management of severe acute malnutrition, and stronger outbreak detection, and control.

A young girl collects her medication from a mobile health unit set up for flood victims in Shangar District, Pakistan.

With the funds available, WHO explained that it is acting quickly to protect health and to deliver essential services, especially for those displaced by the floods, through static and mobile health camps.

To date, medicines and emergency supplies worth $1.5 million have been distributed while over $6 million worth of supplies are in the pipeline.

Efforts have been scaled up to prevent and control disease outbreaks, including strengthening surveillance, undertaking vaccination campaigns against measles and cholera, ensuring early diagnosis and treatment or malaria, and providing access to clean water.

In addition, 10 Emergency Operations Centres (EOCs) and three operational hubs have been established in Sukkur, Hyderabad and Naseerabad districts. 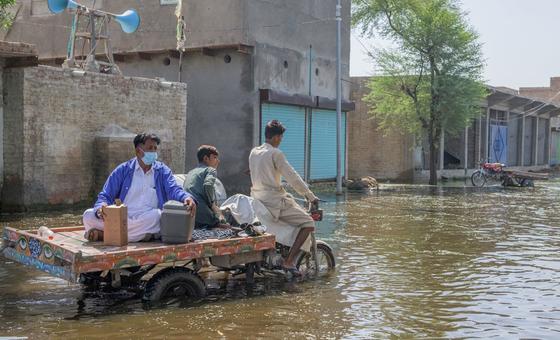