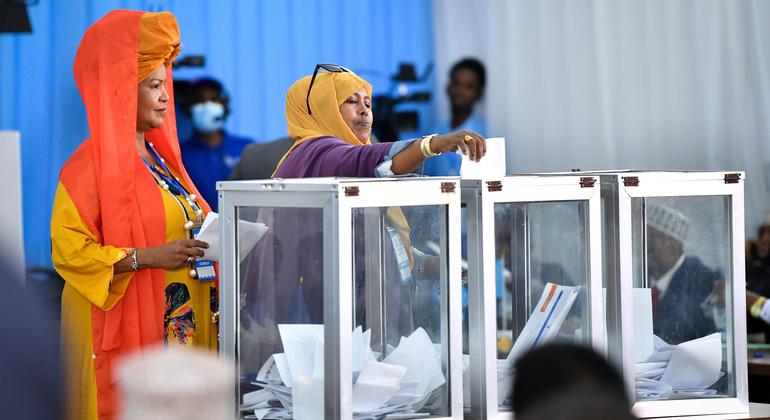 The United Nations in Somalia welcomed the conclusion of the country’s presidential election held on Sunday, praising the “positive” nature of the electoral process and peaceful transfer of power.

“I would like to congratulate the newly-elected President Hassan Sheikh Mohamud on his victory tonight”, said the UN Secretary-General’s Special Representative for Somalia, James Swan, in the early hours of Monday morning.

He also expressed “our appreciation to the other candidates, and particularly outgoing President Mohammed Abdullahi Mohamed ‘Farmaajo,’ for respecting the outcome and for continuing the Somali tradition of embracing whoever wins and supporting them going forward – the  atmosphere tonight, I think, was very positive”.

The top UN official in Somalia was speaking at the conclusion of the election, at the venue in Mogadishu known locally as the “hangar,” located near the Aden Adde International Airport, where he and other representatives of Somalia’s international partners had been invited.

President Hassan Sheikh Mohamud won office on the third round of voting by the country’s parliamentarians, after some twelve hours of voting and counting. There had been close to 40 candidates standing for the office.

The UN Special Representative flagged that the electoral process had been a long one, as well as actively competitive – and that focusing on domestic and state-building priorities should now become the focus of attention.

“There have been some difficult moments in this lengthy election. However, I believe that tonight’s process demonstrated that it was a genuine horse race, that it was a competitive election, and that there was an opportunity for all of the candidates to contest fairly, and, so I think this is an opportunity now to demonstrate that the outcome is credible,” Mr. Swan said.

Time to ‘come together’

“Now it’s time for Somalis and for Somalia’s friends to come together to support the new government as it is installed, and to work on the critical national priorities that still face Somalia,” he added. “There’s much work to be done, and we look forward to being Somalia’s partners going forward.”

Mr. Swan also noted that some of the country’s critical priorities include finishing the constitutional review process, addressing urgent needs for improved development, security and the current drought.

In a tweet later on Monday, the UN in Somalia also praised Somalia’s parliamentary Speakers and Deputy Speakers, the presidential election organizing committee and professional parliamentary staff, as well as Somali security forces and the African Union Transition Mission in Somalia, for ensuring the orderly, peaceful, and secure electoral process.

Like it? Share it!
Deborah Samuel: It’s Either Revolution Ascerta Or Barbarism Continua! By Kunle Wizeman Ajayi < Previous
Assistive technology: a ‘life changer’ for those most in need Next >
Latest News From Malawi
Headlines From: The Maravi Post