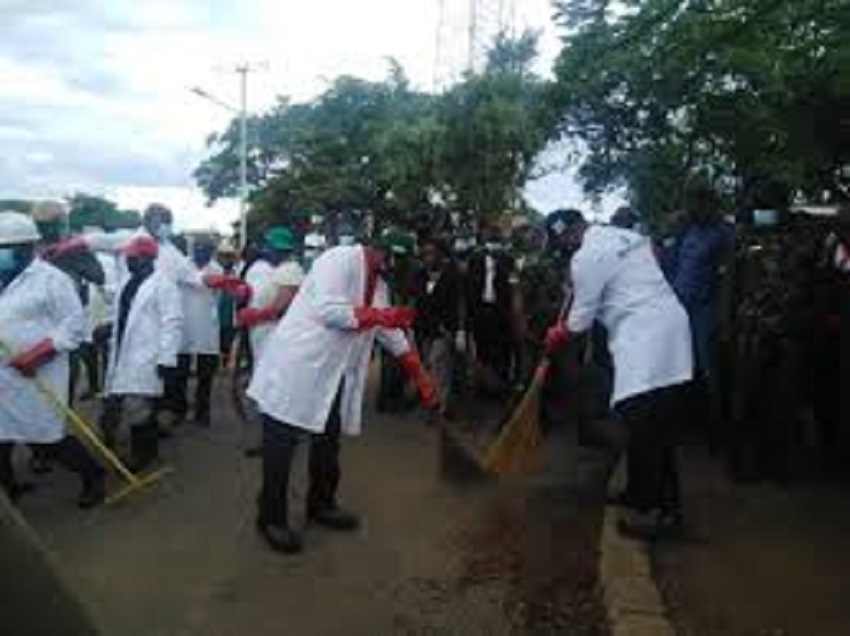 This is the president’s second clean-up excursion since Cabinet resolved that the campaign be institutionalized and be conducted monthly, every second Friday.

Now, you all know that I have been very tough on this president. For this, I owe no one an apology especially now that some who were censuring me for impatience have joined the bandwagon and more are on the queue.

You saw those youths demonstrating the other day? Well, they are a mite too late because today, I am all praise for President  Lazarus Chakwera.

What for? For personally seeing to it that our cities, municipalities, towns, districts, villages and indeed homes are free of filth. Filth which hosts all manner of microbes and parasites which are vectors of all sorts of diseases.

Where was this brilliant initiative hiding? Who knew that we would have a caring leader who would not only institutionalize a clean-up campaign but religiously preside over its conduct?

Kudos to Lazarus Chakwera for agreeing with Benjamin Disraeli that cleanliness and order are not matters of instinct; they are matters of education, and like most extraordinary things, one must cultivate a taste for them!

Indeed, since cleanliness is next to godliness, we should endeavor to keep the environment clean.

Now, allow me to reminisce a bit. I was introduced to cleaning and sweeping public places in Standard 1. Sweeping the school premises and mopping our classrooms and teachers’ offices were our first chores before convening on the assembly.

We were sweeping while singing:

Kantoletole! Yo! (2x) Osatolayo! Yo! Samwa mkaka! (Come on folks, let us clear the rubble! Whosoever does not, will not get a pint of milk!)

I do not recall ever receiving even a drop of milk, but I nevertheless enthusiastically chanted along, Monday to Friday.

Perhaps due to the discipline instilled in me at that age, I do not – even for a split second – believe Malawi or any country out there needs a whole president to lead in sweeping and clearing garbage.

Since no-one needs a constitutional mandate to clean-up; every Jack and Jill can and should clean their premises once, twice, or even three times a day.

If our president has too much time to waste, I would suggest that he should focus on another type of garbage which is begging his full attention.

The truth is that you and I, no matter how motivated, cannot clear the rubble at Capital Hill. We lack the mandate. We are nonentities. And this rubble, as correctly diagnosed by President Chakwera, is 100% responsible for our problems.

Yet, five months on, it is still there.

Now, let us be fair, Chakwera’s government has increased the ACB’s funding in the 2020/21 National Budget by K500 million to K5.2 billion after the allocation was reduced to K3.2 billion in the 2019/20 Budget.

But as Chakwera himself acknowledged when speaking in Blantyre when commemorating this year’s International Anti-Corruption Day, funding is just half the story. Everyone must play a part in the fight.

The problem is, as far as I am concerned, the Malawi public has more than done its part.

Then they went an extra mile: through the Human Rights Defenders Coalition (HRDC) they have provided volumes upon volumes of incidences of corruption crying for investigations, arrests, trials, and convictions.

As icing on the cake, in most of the cases, HRDC’s initial investigations are so thorough that the Anti-Corruption Bureau (ACB) is given fait accompli.

Yet months after Chakwera assumed the presidency and long after the budget was passed; no one, the numerous tips notwithstanding, is behind bars for corruption.

On the contrary, some people fingered via the HRDC are still holding top government positions and in all probability working as the “resistance” and “sabotaging” Chakwera.

Therefore, when Chakwera says enough of talking, now is time for action where “action” means each of us:

• doing something to end corruption where we are.

• doing something to end corruption as a matter of urgency.

• identifying and stopping the particular form of corruption we either commit, or delegate, or enable or tolerate.

I am left wondering; what more does he want ordinary Malawians to do?

Look here, Malawians already took a leap of faith by betting on him in the elections. They then went all the way to provide the ACB, via the HRDC, tonnes and tonnes of evidence.

What more does Lazarus Chakwera want us to do?

Despite my disappointment with Chakwera vis-à-vis his fiery campaign harangues promising to “end corruption” and what we are seeing, I sort of got Chakwera’s drift in his Blantyre speech.

My sympathy, however, quickly evaporated when I heard him say, “…talk is cheap. When it comes to corruption, our obsession with talking is too expensive.”

Coming from Lazarus Chakwera, this is a bit rich.

After funding and unshackling the ACB and seeing that the ACB still insists on being a toothless bulldog, what has he done?

He is happy to talk, talk, and talk ad infinitum. No action. And he expects others to “act”? Who needs to act to propel action in the mandated institutions?

Secondly, when you cut through the bull, one thing becomes clear. From the institutionalized environmental clean-up campaign, Chakwera is aware that filth does not disappear on its own. For filth to disappear, someone must grab a broom, a rake, a shovel, and a wheelbarrow to dispatch it to the garbage dump.

Due to the principle of separation of powers, unlike the literal garbage, Chakwera indeed cannot personally clear the human rubble.

There are institutions mandated to do that. And when those institutions do not seem too keen to act, the buck stops on Chakwera’s door.

Yet here Chakwera is, giving free passes to these institutions which he claims to have duly resourced and unshackled from interference.

If President Lazarus Chakwera needs inspiration, the old primary school clean-up tune is as relevant for clearing the rubble at Capital Hill as it was during my primary school days: Osatolayo asamwe mkaka!

By the way, this tune can also work flawlessly when Chakwera assesses Cabinet members’ performance or lack thereof.