Witch Persecution and State of Emergency in Malawi 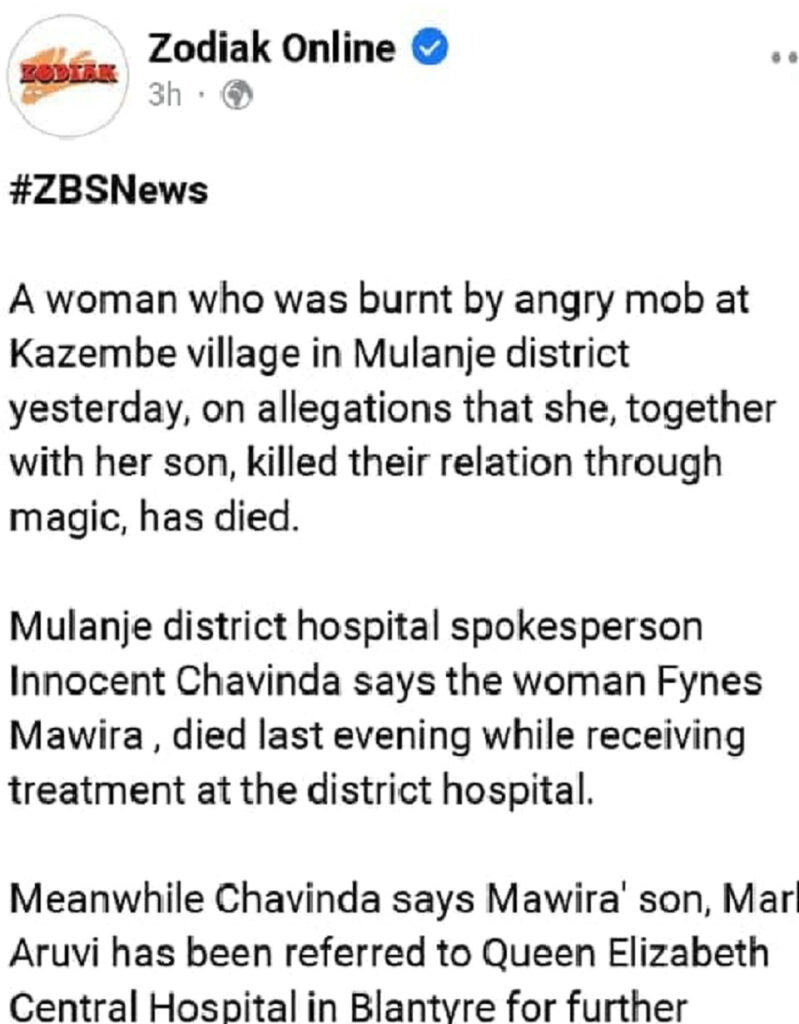 It poses a major threat to the lives, health, safety, and well being of people in Malawi. Unfortunately, Malawi has done very little to address this problem. The world continues to turn a blind eye to this tragic situation. A robust national response is urgently needed to contain the witchcraft related devastations and destruction of lives and property.

Advocates in Malawi say that some accusation or persecution of alleged witches takes place in Malawi every day. In most cases, the persecution ends in the extrajudicial killing-lynching, stoning, or beating to death of the alleged witch. This violent campaign leads to the destruction of property, abduction, and disappearance of persons suspected of witchcraft. There is an ongoing war against alleged witches in Malawi. And this war should end -and must end-now. The government cannot continue to look the other way while innocent persons accused of witchcraft are attacked and killed with impunity.

In the past weeks, AFAW has received reports of violent attacks and murder of alleged witches from various districts across Malawi. In one case, an irate mob stoned the alleged witch to death. And in another incident, a mob lynched the accused. In both cases, the victims were accused of causing the death of persons in the communities.

These cases and other incidents of witch-hunting illustrate a failure of the state of Malawi, a reign of chaos, anarchy, and vigilante justice, the inability of the government to protect the citizens and uphold the rule of law. They demonstrate collective insensitivity and national irresponsibility towards the plight of alleged witches. It is time that the government of Malawi put in place extraordinary measures to guarantee the safety and protection of alleged witches. The government must take cogent steps to end witch bloodletting in the country. The world must send a strong message to the government of Malawi that there are consequences for its continued failure to protect the lives and property of alleged witches. The world must let Malawi know that there is a price for its continued refusal to take appropriate actions and end this campaign of violence and human rights abuses. The international community must demonstrate a willingness to tackle this menace. Malawi should declare a state of emergency on the persecution of alleged witches, or be compelled to do so.

Leo Igwehttps://www.maravipost.com
Leo Igwe (born July 26, 1970) is a Nigerian human rights advocate and humanist. Igwe is a former Western and Southern African representative of the International Humanist and Ethical Union, and has specialized in campaigning against and documenting the impacts of child witchcraft accusations. He holds a Ph.D from the Bayreuth International School of African Studies at the University of Bayreuth in Germany, having earned a graduate degree in Philosophy from the University of Calabar in Nigeria. Igwe's human rights advocacy has brought him into conflict with high-profile witchcraft believers, such as Liberty Foundation Gospel Ministries, because of his criticism of what he describes as their role in the violence and child abandonment that sometimes result from accusations of witchcraft. His human rights fieldwork has led to his arrest on several occasions in Nigeria. Igwe has held leadership roles in the Nigerian Humanist Movement, Atheist Alliance International, and the Center For Inquiry—Nigeria. In 2012, Igwe was appointed as a Research Fellow of the James Randi Educational Foundation, where he continues working toward the goal of responding to what he sees as the deleterious effects of superstition, advancing skepticism throughout Africa and around the world. In 2014, Igwe was chosen as a laureate of the International Academy of Humanism and in 2017 received the Distinguished Services to Humanism Award from the International Humanist and Ethical Union. Igwe was raised in southeastern Nigeria, and describes his household as being strictly Catholic in the midst of a "highly superstitious community," according to an interview in the Gold Coast Bulletin.[1] At age twelve, Igwe entered the seminary, beginning to study for the Catholic priesthood, but later was confused by conflicting beliefs between Christian theology and the beliefs in witches and wizards that are "entrenched in Nigerian society."[1] After a period of research and internal conflict due to doubts about the "odd blend of tribalism and fundamentalist Christianity he believes is stunting African development," a 24-year-old Igwe resigned from the seminary and relocated to Ibadan, Nigeria
RELATED ARTICLES
Human Rights