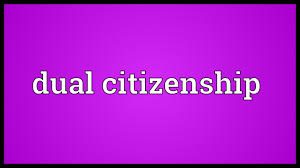 The Zambian Ministry of Home Affairs this week encouraged all interested Zambians living in the Diaspora and non-Zambians living in Zambia, to apply for dual citizenship, this follows amendments that it’s lawmakers made to the Constitution and assented to by President Edgar Lungu.

Home Affairs spokesperson Moses Suwali said in an interview in Lusaka Tuesday that the Ministry has established the modalities for the dual citizenship facility.

Mr. Suwali said the new law puts the country on a progressive road as most people living in the Diaspora, will be able to come back home and positively contribute towards development.

“For people living in the Diaspora, this (law) puts them at great advantage; even foreigners who wish to become Zambians, can now apply. Even people who are refugees, can apply as long as they have a valid passport from their country,” he said.

He warned people against using the new law with ill-intentions, or for abusive purposes. He said this facility should only be used for the good of Zambia and the country, where a citizen is also residing or coming from.

Mr. Suwali said there were legal implications of abusing the dual citizenship facility.

Meanwhile Malawians living in Texas Organization (MITO), and Malawians in Washington (MWA), together with other organizations in the Diaspora spoke with one voice in support of the announcement to the new draft dual citizenship legislation in Parliament by His Excellency Peter Mutharika on July 16, 2016. Pursuant to the Malawi Citizenship and Immigration act of 1966, the Malawian Constitution, does not presently accommodate for Malawian citizens and foreign nationals of Malawian descent above the age of 21 to hold dual citizenship. The proposed legislation would extend this right to all people of Malawian origin.

The current legislation change is not only welcomed news, but a step in the right direction by the Mutharika administration on behalf of Malawians everywhere.

However it’s been twelve months since the carrot was wagged in front of the Malawi Diaspora, however, the statement of support from them, they have heard nothing but silence from the Mutharika administration.

Like it? Share it!
FD Communications partners SWAM for World Sports Journalism Day, AGM < Previous
Murder of election official and threats raise fears ahead of elections  Next >
Latest News From Malawi
Headlines From: The Maravi Post