You are here: Home » Religion » 10 African Pastors Whose Strange acts in the name of performing miracles went viral

There have been stories of some African pastors who do weird things in the name of performing miracles.

Their church members are usually at the receiving end of whatever antics the supposed men of God have chosen to use while a few of the pastors have ended up getting killed in the process of replicating biblical account of a story.

A list of such pastors have been compiled below;

The South Africa-based Ghanaian pastor all in the name of delivering and performing miracles kissed a female church member.

In the 28-second video that went viral online another man shouted: “Yes Lord, Yes Lord” while the Pastor was locking lips with the young lady.

However, it remains unclear if the kiss healed the female church member.

The pastor whose ministry is based in Pretoria, South Africa instructed his followers to drink petrol, claiming he had turned into pineapple juice. He had earlier commanded his members to eat grass so as to be close to God.

In 2014, it was revealed that he held a ‘deliverance session’, where he walked all over some of his church members, while the rest of the congregation looked on.

This man of God who again is from South Africa instructed his congregants to drink rat posion to ‘show forth their faith’.

He told worshipers at the Grace Living Hope Ministries to drink from a bottle of water laced with noxious Rattex to ‘nourish their bodies’ and ‘heal their sickness’.

It was later learnt that the rat poisoning miracle led to the deaths of some while others were hospitalised. 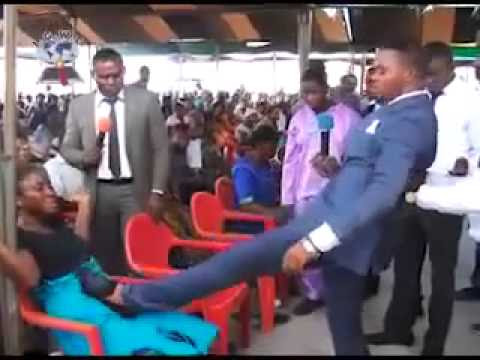 The Ghana-based man of God was captured stepping on the abdomen of a woman, who was reportedly pregnant, to exorcise evil spirits. Obinim was also videotaped grabbing men’s genitals to heal them of erectile dysfunction.

The prophet of Mount Zion General Assembly in Limpopo, South Africa was pictured using an insect killer to heal his followers during a service and prayer meeting in November, 2016. Also, he crushed a woman with a giant speaker to demonstrate God’s protection.

The South African pastor claimed he performed a miracle after he poured boiling water on himself and members of his church.

He claimed he ascended to heaven and took a selfie with God. It was also gathered he ordered his female members to bring their underwears for anointing to protect them against evil spirit.

Photos on Facebook showed Mnguni, who heads End Time Disciples Ministries in Soshanguve, in Pretoria, South Africa, dropping snakes into the mouths of people during a deliverance session.He even claimed that under his order God had turned the snakes into chocolate.

He also ordered his female members to strip while he removed evil spirits by seating on their naked body.

These remaining men of God were killed in their attempts to replicate biblical accounts;

In his attempt of replicating the biblical story of Daniel not getting eaten by lions whilst he was locked in their den, this man of God was mauled by a lion while on a safari with his church members.

Again from South Africa, Ndlovu tried to replicate Jesus by going on a 40 day fast but he failed as he dropped dead on his 30th day of fasting.

A prayer for Malawian Soldiers (MDF) for siding with civilians’ will against Tipex leadership < Previous
They lost the Election big time…They think will get this country, over my dead body -Muntharika adamant Next >
Subscribe to MaraviPost

January 28, 2022, No Comments on Book Review: Janet Karim publishes a book “A Girl Called Gaborone” on child with special needs

Zuneth Sattar’s investigation: Why is ACB only exposing suppliers while hiding officers who awards contracts?

January 28, 2022, No Comments on Zuneth Sattar’s investigation: Why is ACB only exposing suppliers while hiding officers who awards contracts?

In central Sahel, ‘needs are growing faster than generosity’

January 28, 2022, No Comments on In central Sahel, ‘needs are growing faster than generosity’

January 28, 2022, No Comments on Transparency International (TI): Fate Of Africa In The 4th Industrial Revolution, By Richard Odusanya.

Politics of Fuel Subsidy Removal in Nigeria; the Chickens have returned to Roost ​​​​​​By Usman Okai Austin

January 27, 2022, No Comments on Politics of Fuel Subsidy Removal in Nigeria; the Chickens have returned to Roost ​​​​​​By Usman Okai Austin

January 27, 2022, No Comments on EUTELSAT KONNECT satellite selected by Intersat for Internet connectivity over Gambia, Guinea Bissau and Senegal 

January 27, 2022, No Comments on Bybit Completes Integration of Arbitrum

Louvre Abu Dhabi explores the links between East and West

January 27, 2022, No Comments on Louvre Abu Dhabi explores the links between East and West

January 27, 2022, No Comments on Why Nigeria “Can’t” Remove Fuel Subsidy: The Danger Of Political Corruption, By Shakir Akorede

A Defeat Foretold? By Azu Ishiekwene

January 27, 2022, No Comments on A Defeat Foretold? By Azu Ishiekwene