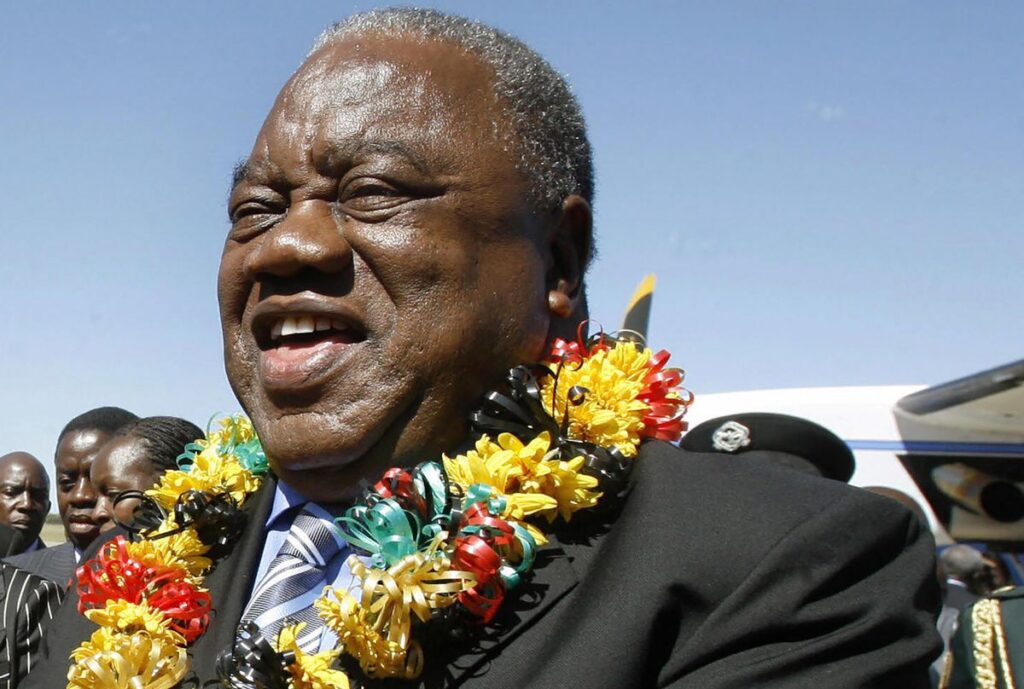 Zambians are sombre, as they prepare to put to rest, their former (fourth) republican President, Rupiah Bwezani Banda, fondly called ‘RB’, who died of Colon Cancer, on March 11, 2022, at the age of 85.

He was diagnosed as having the disease in 2020 and had been receiving treatment.

The burial has been set for Friday, 18th March, at the Presidential burial site, ‘Embassy Park’, in Zambia’s capital, Lusaka.

Current President, Hakainde Hichilema, has since declared the day, a national public holiday. The country has been observing a seven day period of national mourning in Banda’s honour.


Banda was given a 21 gun salute by the army, at a State Funeral held for him on Thursday, March 17, at the Show Grounds in Lusaka, which was attended by various foreign dignitaries, mostly current and past presidents on the African continent, led by President, Hichilema.

Residents followed the live proceedings, on the national broadcaster, ZNBC and others lined the streets of Lusaka, to view the late President’s cortege, as his remains were transported to the venue of the State Funeral.

“We should embrace tolerance, as President Banda, always did. Let us be friendly, not to one, but to all. This is priceless, but yet valuable. To our dear fourth President of the republic of Zambia, Mr Rupiah Bwezani Banda, we say thank you! Thank you for the immense contributions you made towards the betterment of our motherland – Zambia, the continent and the rest of the world,” Hakainde stressed.

“Tanzania, has lost a great friend and a comrade in arms. During his time as Zambia’s diplomat, foreign minister and later, President, he was instrumental in promoting and advancing the friendship and bilateral relations between our two brotherly nations. The excellent bilateral, political, diplomatic and social- economic relations between Zambia and Tanzania, are what they are today, thanks in many ways, to the contribution made by his Excellency, Rupiah Bwezani Banda.

There is also Rupiah Banda’s foot print in the liberation of the nations of Southern Africa, in the regional integration agenda under the auspices of SADC. At continental level, he will be remembered for being a staunch believer and promoter of African unity and at the global level, he will be remembered as a promoter of world peace and a tireless fighter for a fair and just political and economic order,” said Kikwete.

“Here was a leader, who represented his country, Zambia, very diligently and passionately and cared so much for our region and it’s people,” said former Botswanan President, Ian Khama.

Born in Zimbabwe, then Southern Rhodesia, on 19 February, 1937, President Banda, who participated in Zambia’s struggle for independence, having started politics at a tender age, held a series of diplomatic posts, after Zambia’s independence in 1964 and was appointed as the first Ambassador to Egypt at the age of 27, by the country’s founding president, Kenneth Kaunda.

In 2006, the late third republican president, Levy Mwanawasa appointed Banda, as Zambia’s vice-president and two years later, he took over President Mwanawasa’s responsibilities, after   Mwanawasa, suffered a fatal stroke, while on official duty in Egypt.

Banda was later that year (2008), to become, the elected president, after narrowly beating his closest rival, late Michael Sata, who later beat him in the 2011 presidential election.

A President for all Zambians

Being social, somewhat laid back and having the ability to  make people laugh, will no doubt be mentioned, among the many attributes that people far and wide, especially Zambians, will remember Rupiah Banda for,  as he was a natural for cracking jokes.

An ever-smiling  President, loaded with such wisdom and a great sense of humour, he prided in describing himself as a ‘President for all Zambians’, a slogan which represented his desire to make all citizens feel comfortable with him, regardless of their tribe or political affiliation.

Meet the women who became presidents in Africa

Like it? Share it!
At Least 70 Migrants Reported Dead or Missing Off Libya < Previous
Abuja’s technology and innovation fair showcases new inventions Next >
Latest News From Malawi
Headlines From: The Maravi Post