Boko Haram leader Abubakar Shekau has appeared in a new video,  reading a few lines of the first stanza of the Nigerian national anthem.

The latest video was released a little more than two months after his last in which he recited the Nigerian pledge, which he denounced as shirk – an Islamic concept of associating a partner with God and is deemed one of the greatest sins in Islam.

In the twenty-six minutes video seen by The Guardian, a visibly ageing Shekau reiterated his anti-government messages and distastes for Western influence.

He cited Dr Sanusi Iguda’s Dafin Boko and Babs Fafunwa’s History of Education in Nigeria to buttress why Muslims should reject western education because of its Judeo-Christianity roots.

Shekau denied his eyes are failing and that some of his fighters do not perform five daily prayers compulsory for Muslims.

Nigerian government and military have consistently maintained in the last two years that Boko Haram has been “degraded” or “defeated”.

The “real Boko Haram we know is defeated,” Garba Shehu, a spokesman to Nigeria’s President Muhammadu Buhari said in July.

But an analyst at the Tony Blair Institute for Global Change Audu Bukarti said Boko Haram “remains a potent threat”.

“This video is intended to recruit fighters, funders and sympathizers,” Bukarti said. “It demonstrates that Shekau is alive and that he’s committed to his group’s ideology as always. ” 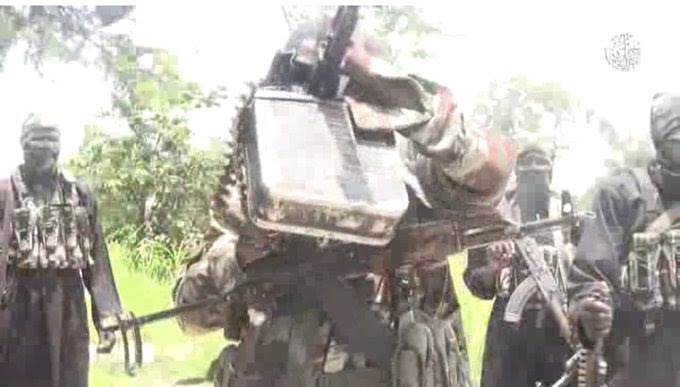 This video is intended to recruit fighters, funders and sympathizers; it demonstrates that Shekau is alive and that he’s committed to his group’s ideology as always.
It also show that, contrary to reports, the faction of Boko Haram he leads (JAS) remains a potent threat.

The larger and more sophisticated group is affiliated with so-called Islamic State and known as Islamic State in West Africa Province (ISWAP). The smaller and cruder faction is led by Shekau and is called Jama’at Ahl al-Sunnah li-l-Dawah wa-l-Jihad (JAS).

There have been dozens of attacks on military bases since July, most of which have been blamed on ISWAP, or claimed by ISIS as ISWAP attacks.

The raids are part of a wider pattern of attacks in northern Borno, which the United Nations has warned is increasingly affecting civilians.

ISWAP has lately intensified its armed campaign, launching a number of major assaults on military targets in Borno and neighboring Yobe state amid signs of a takeover by more hardline leaders.

More than 27,000 people have been killed since the insurgency began in 2009, and 1.8 million people are still homeless and in need of humanitarian assistance.

December 4, 2021, No Comments on Suspected jihadists kill at least 30 people in central Mali

December 4, 2021, No Comments on Mixed reactions as Gambians vote in presidential election

My Take On It: Oh no! Omicron is coming, it’s coming from Africa!

South Africa’s President Is Not In West Africa To Taste ‘Jollof Rice’, By Chido Nwangwu

December 4, 2021, No Comments on South Africa’s President Is Not In West Africa To Taste ‘Jollof Rice’, By Chido Nwangwu

December 4, 2021, No Comments on Sanwo-Olu’s “White Paper”, Walk For Peace Or Trampling On Truth, By Bolaji O. Akinyemi

December 3, 2021, No Comments on Champions South Africa top Group A on first day of Dubai Sevens

A school in Niger uses cutting-edge equipment to train engineers, adding to the growing pool of skilled young Africans

December 3, 2021, No Comments on A school in Niger uses cutting-edge equipment to train engineers, adding to the growing pool of skilled young Africans

December 3, 2021, No Comments on Rights experts call for end to violence against women in Tigray conflict
Most Popular Posts
Recent Comments