You are here: Home » Opinion » Dissecting The Politics Of LASU’s 9th Vice-Chancellor: Who Will Wear The Crown? By Olalekan Akinloye

Dissecting The Politics Of LASU’s 9th Vice-Chancellor: Who Will Wear The Crown? By Olalekan Akinloye

Prof. Olatunji-Bello is not new to the game. This is her 3rd attempt at the goal, and the chances that she will be appointed as the 9th Vice-Chancellor are quite bright. She is a Professor of Physiology, an astute academic and an administrator per excellence. Ibiyemi once served as Deputy Vice-Chancellor (Academic) and later Acting Vice Chancellor of Lagos State University. She is the current Director of the Directorate of Advancement, office of the Vice Chancellor, Lagos State University. Olatunji-Bello is also Chairman, 2020 National Working Committee of the Committee of Wives of Lagos State Officials (COWLSO).

Professor Olumuyiwa Odusanya came to limelight in LASU politics with his appointment as the Director of Research and Innovation, Lagos State University, by the outgoing Vice-Chancellor. Odusanya is a Professor of Public Health and Consultant Community Physician. In his role in the Directorate of Research and Innovation, he has to his credit two well organised Research Fairs in LASU in 2019 and 2020.  What is interesting about his candidature to the position of the 9th Vice-Chancellor in LASU is how and why he has been shortlisted without a PhD degree. Although he possesses the Fellowship certificate of the National Postgraduate Medical College of Nigeria, the advertisement for the position clearly states that such a candidate must be a scholar with significant impact in areas of international supervision and examination of PhD, and must also have supervised students (especially PhD). You cannot supervise a PhD if you do not possess a PhD Degree. The question that is facing the Joint Council and Senate Selection Committee, headed by Professor Bayo Ninalowo, the Chairman of the Governing Council is how it arrived at shortlisting Professor Odusanya few weeks after the Governing Council of the University dismissed many academic staff across different cadres for not possessing PhD. 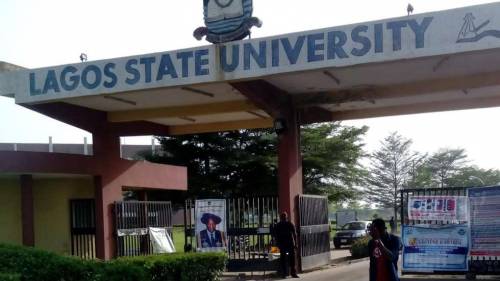 There are feelers among staff that the inexplicable exclusion of those who have become Professors, but without PhD, was as a result of the outgoing Vice Chancellor’s desire to have Odusanya as his successor. The question however, is whether a university that is currently flushing out some of its academics without PhD on account of lack of academic progress can afford to have a Vice Chancellor who does not possess a PhD. One of the issues raised against the predecessor of Fagbohun, Professor John Obafunwa, by the staff unions at the peak of the 2014/2015 crisis that rocked the University was that he was unfit ab initio to lead the University, since he didn’t possess a PhD.

At the valedictory speech of Fagbohun on Friday 18th December, 2020, shouts of ‘incoming’ could be heard each time he eulogized Professor Odusanya, who was in attendance. It is not out of place for an outgoing to be interested in who succeeds him or her. However, caution should be served as Fagbohun should not assume to possess a divined-grace-gift to LASU to warrant him become a schemer of a successor as a matter of his choice and caprice. The recent call by some ‘opinion leaders’ in LASU that Governor Sanwoolu, the Visitor, should pick the next Vice Chancellor on merit has been described as part of a coordinated media effort set to intensify in the last week of the year to force the hand of government in appointing a candidate that enjoys the backing of the outgoing Vice Chancellor and the Chairman of Council. The shortlisted candidates meanwhile, continue to explore all avenues to make their cases by visiting political leaders and traditional rulers, including the wife of the former Governor of Lagos and current Senator, Remi Tinubu, whom some have said to have promised Odusanya in discussing him with Asiwaju Bola Tinubu who is believed to have the final say on the matter.

It is unclear yet where the pendulum will swing in this race for the position of the 9th Vice Chancellor of LASU. Beyond the two leading candidates, the other three also have outside chances. Although Professor Akinyemi is also said to be statutory unqualified, having not met the 10 years’ post-professorial experience stipulated in the advert. It is on the same basis of this 10 years’ post-professorial experience that a former Deputy Vice Chancellor (Academic) to the outgoing Vice-Chancellor, Professor A.O.K Noah was disqualified. This is what is fueling the feeling in some quarters that the Joint Council and Senate Selection Committee seems to vary the conditions in the advertisement in order to suit some and disqualify some others. There is thus a burden of demonstrable transparency on the Ninalowo-led Committee, to ensure that a new round of crisis does not engulf the University on the basis of the selection process.

The call that merits should be considered on the appointment of the new LASU VC appears unwarranted, especially without a proper articulation of what merit in this case entails. Beyond the proxy war, all the five candidates have some merits, to a reasonable level. It is only the Governor and Visitor to the University, Mr. Babajide Olusola Sanwoolu, who is bestowed by the LASU Laws of 2004 to make the choice among the shortlisted candidates after the Joint Council and Senate Selection Committee led by the Chairman of Council presents the details of the results of the interview to him. Whether the various political moves by the different parties will influence the Visitor’s decision, it is the LASU community that will bear the outcome, no matter how good or bad.

Like it? Share it!
The Miracle Of Kankara, Cows And Snakes By Achike Chude < Previous
CAR: President Touadéra Campaigns to Supporters Amid Rising Tensions Next >
Latest News From Malawi
Headlines From: The Maravi Post