HomeMalawiHealthDogs cause havoc in Rumphi; Over 400 biten
Health

Dogs cause havoc in Rumphi; Over 400 biten 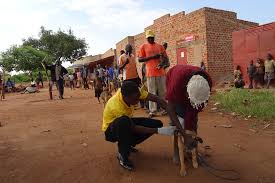 A surge in cases of dog bites has been recorded in Rumphi prompting District Animal Health and Livestock Development authorities to issue a warning that if left unchecked, it could lead to a rabies outbreak.

District Animal Health and Livestock Development Officer Harvey Kumwenda told Malawi News Agency his office has since January 2018 registered 464 cases of people bitten by dogs in which 23.2 percent of the people have been bitten by suspected rabid dogs.

Kumwenda said his office would face challenges to handle a rabies outbreak due to insufficient stocks of Anti-Rabies Vaccine (ARV).

“In case of an outbreak, it would be difficult for us to ably handle the situation because we do not have enough vaccines in stock to carter for all the pets in the district. This is because we don’t have enough funding and besides that,the vaccine is quite expensive,” Kumwenda explained.

According to Kumwenda, his department receives K4 million but the department needs K12 million to purchase ARV for dogs and cats which have a high population in the district.

Kumwenda said Ministry of Health spends a lot of money on ARVs to treat people who are diagnosed with rabies.

“It is cheaper to vaccinate pets against rabies, because it only costs K5, 000 per dog but government spends over K40 000 to treat a person who has been bitten by a rabid animal,” he said.

He then appealed to Rumphi District Council to formulate bylaws that would regulate and recommend the required number of pets per household to reduce high population of dogs in the district.

“Currently, one household has over five dogs which they cannot manage to feed,” Kumwenda explained.