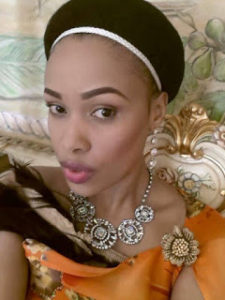 No details of the cause of death have been officially released but newspapers in South Africa say she was being treated for skin cancer.

The King chose Nothando Dube to be his 12th wife in 2004 when she was a 16-year-old schoolgirl. He noticed her when she was a finalist in the Miss Teen Swaziland beauty pageant. King Mswati was aged 36 at the time.

The King has married at least 15 times, but the exact number is considered a state secret. Another wife Inkhosikati LaMasango died in April 2018, aged 37, reportedly following an overdose of pills. Others of the King’s wives have reportedly escaped from him and moved abroad.

Unintentionally, during her life LaDube exposed some of the worst tendencies of King Mswati. In 2010 she was caught in an adulterous affair in a room at the Royal Villas hotel, Ezulwini with the then-Swaziland Minister of Justice and Constitutional Affairs, Ndumiso Mamba.

Mamba was a childhood friend of Mswati. The King was on an official visit to Taiwan at the time.

The affair was kept secret from the Swazi people. In Swaziland all broadcast media are under state-control. Of the two daily newspapers, one is in effect owned by King Mswati and the other consistently censors itself when reporting about the King and his family.

Media outside Swaziland reported the affair and its aftermath fully. A palace source told AFP, the international news agency, that LaDube would dress in a military uniform to slip out of the Lozitha palace and meet Mamba in a hotel room. AFP quoted a palace source saying, ‘She allegedly got into her room and changed into her uniform and walked straight to the gate and no one bothered to ask where was this soldier going. In no time a car was there to pick the “officer” up and whisked her to Royal Villas about 10 kilometres west of the Lozitha Palace.’

Photographs of Mamba captured by police hiding under the bed at the hotel room circulated in South African newspapers and on the Internet.

Mamba who like the Prime Minister and all government ministers had been personally appointed by King Mswati, quit his post.

City Press in South Africa reported that Swaziland’s military agents had been on the trail of the adulterous pair for several months. LaDube was placed under what amounted to house arrest and was not seen in public for a year. Mamba was at first arrested but not charged with an offence. He has kept a low profile in Swaziland.

In July 2011, the Mail & Guardian newspaper in South Africa reported LaDube was ‘begging’ to be rescued from house arrest. It reported LaDube had been restricted to her royal residence in July 2010. She told the Mail & Guardian that she has not seen or spoken to the King since and that none of the members of the royal family had confronted her about the allegations, which she denied.

LaDube said the royal security guards told her she was not allowed to see or interact with her family and friends.

‘My side of the story was not heard. Ever since that scandal happened, we haven’t been talking with this man that I married. Things have been bad and now they are worse. I really, really want out and I can’t, he is just not letting me go. It’s like I am in prison; I am under 24-hour surveillance,’ she said.

‘My friends and family have been banned from seeing me and I really feel like I don’t want to be here anymore because I feel like I am in jail. This is not healthy and I can’t live like this forever and I see no point of sticking around.’

At about the same time the Swazi Shado blog published a report that seemed to contradict LaDube’s account. It said that she had been seen in public for the first time in about a year and gave an interview on fashion tips to the Times Sunday, an independent newspaper in Swaziland.

In November 2011, the Sunday Times newspaper in South Africa reported LaDube had been kicked out of the royal palace following a fight with a security guard. She said she pepper-sprayed him in the eyes to protect herself.

It added she was ordered to ‘immediately leave the palace’ by royal governor Timothy Mthethwa, ‘who was accompanied by other senior members of the royal family’.

LaDube, who was aged 23 at the time, told the newspaper she had had an argument with a security guard who refused to let her out of the palace. She wanted to take the youngest of her three children, aged two, to hospital after she had injured herself while playing – but the guard said she was not allowed to leave.

The matter was reported to the Queen Mother who, the Sunday Times reported, apparently decided that LaDube had been disrespectful and had to be kicked out.

CNN, the US-based cable news channel, also reported LaDube had been ‘banished’ from the palace.

In December 2011, Independent newspapers in South Africa reported she had ‘been dumped at her maternal grandmother’s home in Hhohho’.

It added, ‘She has been separated from her children, the youngest being two years. She has no food and the house she was dumped in has no bedding.’

It also reported LaDube was the third of King Mswati’s wives to leave the palace. She followed LaMagwaza and LaHwala, who went to live in South Africa.

It reported, ‘LaMagwaza was accused of having a steamy sexual relationship with a South African toy boy. Sources claimed that she was sex starved, as the King would not visit her.

‘At the height of the sex scandal, she was granted permission to visit her family home at Mbekelweni in central Swaziland and never returned. She is reported to be living a prosperous life after marrying an SA tycoon with whom she has a child.

‘LaHwala was also neglected by the King who would deny her conjugal rights for six months at a time.

‘Her uncle and guardian, Simon Noge, made a special request to the King for her to visit South Africa. She never returned.’

Like it? Share it!
Mombera university construction to commence this month < Previous
UTM Party Chilima calls for quick support to floods victims Next >
Latest News From Malawi
Headlines From: The Maravi Post