HomeRegionalAMAFamilies around the world spend 156% of monthly income on Christmas –...
AMABusinessTechnology 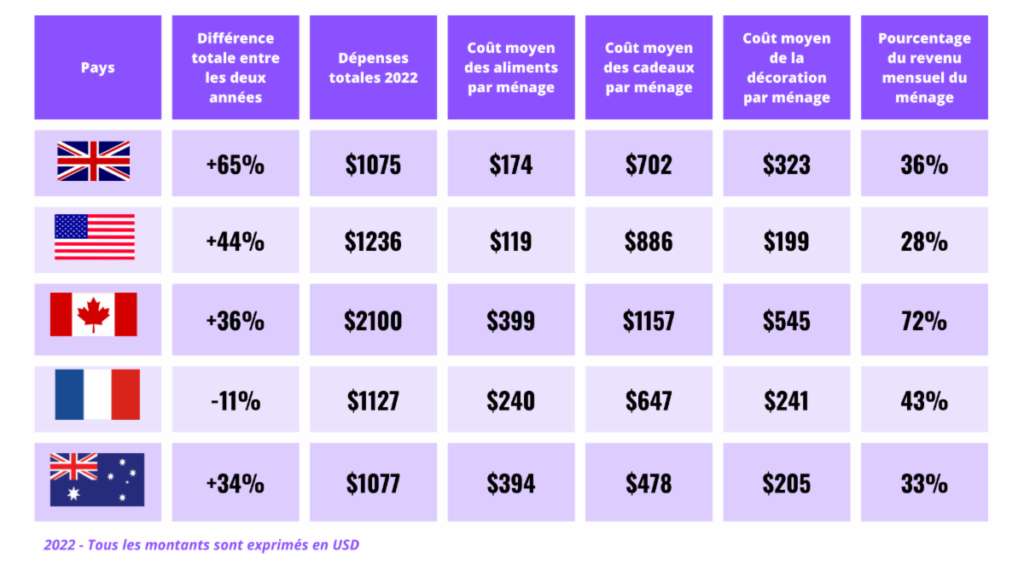 HARARE, Zimbabwe, 16 November 2022,-/African Media Agency (AMA)/- Families around the world can expect to spend up to 156% of their monthly income on Christmas this year, according to the latest results from the WorldRemit Cost of Christmas study.

With unique traditions, gift giving ideas, and seasonal meals in every region, the global landscape sees a wide diversity of costs associated with the holiday season.

In its second year, the findings are part of WorldRemit’s 2022 Cost of Christmas Study, which observes how the changing macroeconomic environment affects the cost of standard Christmas elements, including the main holiday meal, average gift spending and decor, across 23 countries globally. In addition to the 14 countries from the initial study, the brand added 9 new countries this year to further observe the ways different cultures celebrate, and budget for, the global holiday. The study compares the average cost of food, gifts, and decor to average household incomes to determine the season’s financial impact on families around the world.

Of the 14 countries examined for the second season, five are considered developed economies: United Kingdom, United States, Canada, France and Australia. The 2022 findings reveal the average seasonal increase across these five countries was 33%, with the UK seeing the greatest change, as prices rose more than 60% year over year for the Brits. This anticipated high cost is brought on by the drastic and sudden increase in inflation, which has forecasters predicting more extreme costs this season.

Of the remaining nine countries indexed (Cameroon, India, Lebanon, Nigeria, Rwanda, Uganda, Kenya, Philippines, and Mexico), the average cost of Christmas increased by 9%, and the cost changes varied widely. While India (-2%), Kenya (-17%), and the Philippines (-38%) saw a reduction in costs this year, Cameroon (+56%) and Uganda (+34%) will see substantial increases.

Across the 14 countries observed in both 2021 and 2022 studies, the increase in the Cost of Christmas was, in part, attributed to a rise in the amount of money allocated towards food over the holidays. This consistent increase in the price of food, which saw the highest increase (50%) year over year, compared to 13% and 21% increases across the other categories, means families globally will likely need to shift their budget planning to accommodate for the increased costs of holiday meals. These findings reflect similar conclusions drawn in WorldRemit’s recent Cost of School and Cost of Living studies. Further details include:

WorldRemit added nine new countries to the annual index, including Germany, the Netherlands, Zimbabwe, South Africa, Fiji, Spain, Colombia, the Dominican Republic, and Guatemala. Results show that Zimbabwe will be most impacted by this year’s costs compared to the nation’s average monthly household income, as most families can expect to pay more than 2.6 times their income on the holiday. Zimbabwe is a nation that is heavily impacted by remittances – in 2020, the inflow of remittances accounted for more than 10% of the nation’s GDP. Other countries, including Fiji and Morocco spend close to 100% of their monthly income on Christmas.

Distributed by African Media Agency (AMA) on behalf of WorldRemit.

In the study, WorldRemit looked at the following countries and researched the cost of food, gifts, and decor:

The Christmas items were selected based on desk research of typical Christmas meals, gifts and decorations. We then researched the average price of each item for an average family on an average income. The prices were researched online in late October 2022 – November 2022. Prices and breakdowns of what is appropriate for Christmas celebrations in each country were then shared with locals of that country who we hired to validate the data as correct.

We disrupted an industry previously dominated by offline legacy players by taking international money transfers online – making them safer, faster and lower-cost. We currently send from 50 countries to recipients in 130 countries, operate in more than 5,000 money transfer corridors worldwide and employ over 1,200 people globally.

On the sending side WorldRemit is 100% digital (cashless), increasing convenience and enhancing security. For those receiving money, the company offers a wide range of options including bank deposit, cash collection, mobile airtime top-up and mobile money.