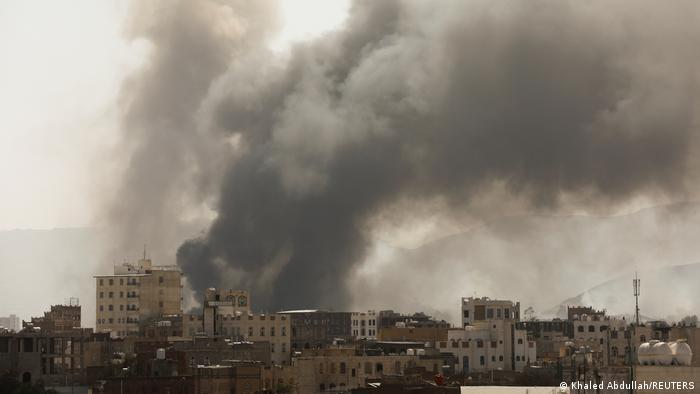 
Several African migrants were killed in a fire at a overcrowded migrant detention centre in the Yemeni capital, Sana’a over the weekend.

The centre housed migrants mostly from Ethiopia, according to officials with the UN Migration Agency (IOM) who say as many as 30 people died and some 170 reported injured.

Migrants and guards are reported to be among the dead.

The fire started shortly after renewed Saudi airstrikes in Yemen as UN officials say conditions at the detention facility have been in bad state even before the strike.

IOM’s Carmela Godeu said in a tweet that her team “are extremely saddened by the death of migrants & guards resulting from a fire at a holding facility in Sana’a, Yemen, today. 8 people confirmed dead; the total death toll is reported to be much higher. All those affected and their families are in our thoughts.”

She added that “IOM is responding particularly with emergency health care for over 170 injured, more than 90 of them are in a serious condition. Our teams are also distributing food to those affected and we continue monitoring the situation closely.”

Meanwhile Godeu said “the cause of the fire incident in the holding facility remains unclear. But this is just one of the many dangers that migrants have faced during the past 6 years of the crisis in Yemen. All people, including migrants, should be afforded protection and safety.”

#IOM is responding particularly with emergency health care for over 170 injured, more than 90 of them are in a serious condition. Our teams are also distributing food to those affected and we continue monitoring the situation closely. (2/3)

The Houthi authorities fighting the war in Yemen have accused the IOM and the UN of failing deport migrants but rather housing them.


Despite Yemen’s endless war, tens of thousands of migrants – mostly from the Horn of Africa – try and pass through the country every year, hoping to find work in neighbouring Saudi Arabia.